Multiple social media posts have shared purported screenshots of Indonesian media articles claiming Indonesian President Joko Widodo, popularly known as Jokowi, said he was not interested in extending his presidential term "unless the public wants it". However, the screenshots have been doctored to add false headlines. As of April 19, 2022, Jokowi has not indicated he plans to serve beyond his constitutionally mandated two-term limit, which is set to end in 2024.

The first screenshot was shared here on Twitter on February 21, 2022.

The Indonesian-language headline translates to English as: "Jokowi: I am not interested in running for three terms unless I am forced by the people."

The post's caption translates to English as: "Hmmm...is that true??? Where are the people who are forcing you? Are the people forcing him or is he forcing the people???" 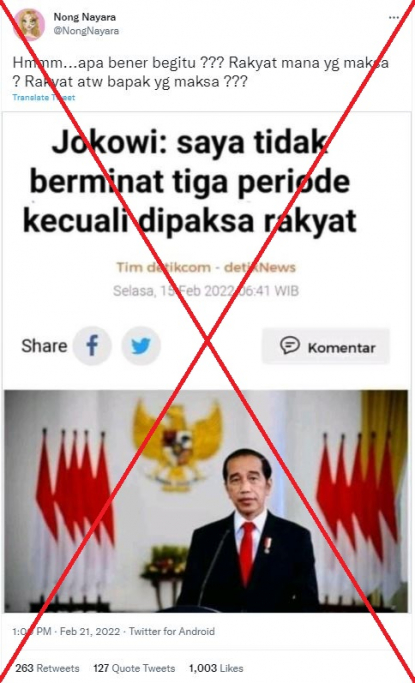 Screenshot of the first misleading post, taken on April 12, 2022

The image was shared alongside a similar claim in April 2022 on Facebook here, here, and here.

A second screenshot was shared here on Facebook on February 20, 2022.

It appears to show an Indonesian-language news headline that translates to English as: "Jokowi: I emphasise I am not interested in three terms unless I am forced by the people."

The Facebook post's caption translates in part as: "Unless he is forced by Megawati and Luhut...You Puppet". 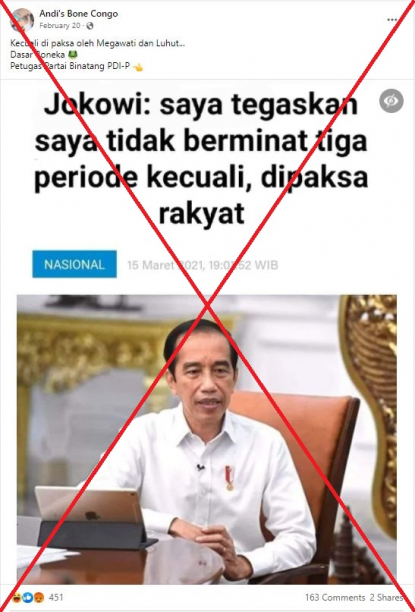 Screenshot of the second misleading post, taken on April 12, 2022

Megawati Sukarnoputri is the chairwoman of Jokowi's party, while Luhut Binsar Pandjaitan is a senior minister in Jokowi's cabinet.

Senior ministers -- including Luhut -- and several political parties in March 2022 suggested the elections should be delayed and the constitution amended to allow presidents to serve more than two terms, AFP reported.

The Southeast Asian country's next elections is set to be held in 2024 and Jokowi would not be eligible to run as Indonesia places a two-term constitutional limit on its leader.

Thousands of students staged a protest in Jakarta on April 11, 2022, against extending the presidential term limit.

The misleading screenshot was also shared on Facebook here.

The original news article includes the same photo of Jokowi, the same byline, and the same publishing date and time as the screenshot in the misleading post.

However, the original headline reads: "Voices of rebuttal when photos of Jokowi and Suharto were put side by side".

According to the report, Jokowi's supporters were unhappy after several civil society organisations posted a photo montage of the current president with Suharto, Indonesia's late authoritarian leader, in social media posts criticising the current government's policies.

The Jokowi-Suharto picture can be seen on Instagram here and here.

Below is a screenshot comparison between the first misleading image (left) and the genuine Detikcom report (right): 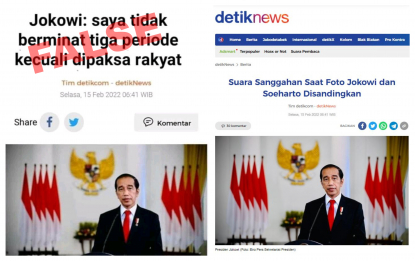 The second image has been doctored from this report by Indonesian media outlet Jawa Pos published on March 15, 2021.

The original report features the same photo of Jokowi, the same section, and the same publishing date and time as the misleading screenshot.

However, the headline of the original Jawa Pos article reads: "Jokowi Says Not Interested to Become Third-Term President."

Below is a screenshot comparison between the second misleading image (left) and the original Jawa Pos report (right): 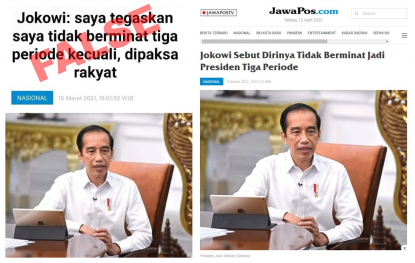 Online searches found that both Detikcom and Jawa Pos have not published any reports attributing the misleading statements to Jokowi.

Jokowi said on March 30, 2022, that he would "obey the constitution" when it comes to term extension, and later announced on April 10, 2022, that there will be no postponement of the 2024 elections.

As of April 19, 2022, Jokowi has not said that he wants to extend his presidential term.