Skip to main content
A woman casts her ballot at a polling center during the regional election in Denpasar on the Indonesia resort island of Bali on December 9, 2020. ( AFP / Sonny Tumbelaka)

A video clip of an Indonesian politician speaking about upcoming elections has been viewed tens of thousands of times alongside a claim the country's parliament "has officially postponed" the polls. However, the claim is misleading; the video actually shows a lawmaker saying he had suggested the postponement. As of March 30, 2022, Indonesia's general elections are scheduled for February 14, 2024. Constitutional law experts have said it would be "legally difficult" to delay the elections without amending the constitution.

The Indonesian-language caption of the post translates as: "Finally the House of Representatives has officially postponed the 2024 general elections, this is the explanation."

The four-minute, 42-second video shows the parliament's Deputy Speaker Muhaimin Iskandar telling reporters that he thinks the general elections should be delayed.

"I suggest that the elections be postponed for one or two years to maintain the momentum for economic recovery, so that a freeze won't happen after the stagnation during the pandemic," Muhaimin says in the video. 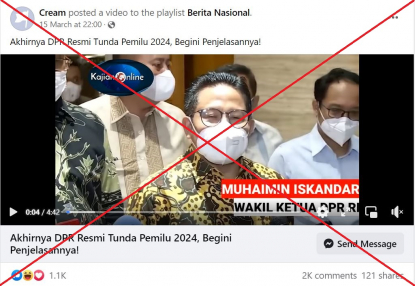 Indonesia holds its general elections once every five years.

The next poll is currently scheduled for February 14, 2024, according to this announcement published on the Cabinet Secretariat's website in January 2022.

Muhaimin, whose National Awakening Party is part of the ruling coalition, is among several Indonesian politicians who have raised the idea of postponing the general elections in the interest of maintaining the current recovery of the country's economy, local media reported.

The suggestion has raised fears such a move could threaten democracy in Indonesia.

The video, along with similar claims was also shared in other Facebook posts here, here and here.

AFP found a longer video was posted to the YouTube channel of Indonesian broadcaster Kompas TV here on February 24, 2022.

The video's Indonesian-language title translates as: "Cak Imin’s full statement on his suggestion that the 2024 elections be postponed".

In the full video, he does not say that the House of Representatives had "officially postponed the 2024 elections".

Instead, Muhaimin says multiple times he is only making a suggestion.

The video in the misleading post is a mirror image of the genuine video.

Below is a screenshot comparison of the video in the misleading post (L) and the Kompas TV video (R):

As of March 30, 2022, there has been no statement from either Indonesia's parliament or the elections oversight body  that the 2024 elections have been postponed.

Feri Amsari, a constitutional law expert at Andalas University in Indonesia, pointed out that Article 22E of the Indonesian Constitution states that "general elections shall be executed in a direct, public, free, confidential, honest, and just manner once every five years".

"So, without amending the constitution, it would be legally difficult to postpone the elections," he told AFP.

"But it’s not impossible that there could be some particular political powers disobeying what’s written in the constitution and then legalise any effort to postpone the elections based on some particular interpretations," he added.

As reported by local media here and here, constitutional law expert Yusril Ihza Mahendra said that amending the constitution "is the strongest basis to give legitimacy to postpone the elections", but he also warned that the delay could lead to "power vacuum".

The Election Law stipulates that general polls in Indonesia can be postponed when the country has been struck by "riots, security risks, natural disasters or other disturbances" that could prevent elections from being held.