Skip to main content
A magnolia tree, known as the Jackson Magnolia, stands alongside the South Portico of the White House in Washington, DC, January 5, 2018 ( AFP / Saul Loeb)

Social media posts suggest an official photo of US President Joe Biden's departure for Europe in late March 2022 was staged because it showed leaves on trees while most vegetation in the nation's capital was still bare-branched. This is false; the photo is authentic and the trees are southern magnolias, which retain their leaves throughout the year.

"They are lying and faking their way through this entire contrived and stolen presidency," says a March 24, 2022 Facebook post that features screenshots of two tweets, one from the official account of the president of the United States, and the other from a man whose account identifies him as a filmmaker and former congressional staffer.

The first tweet shows Biden saluting as he boards the Marine One helicopter from the White House's South Lawn on March 23. In the background, two trees with full foliage can be seen near the South Portico of the building. "I'm on my way to Europe to rally the international community in support of Ukraine," the tweet from the official @POTUS account says.

The second tweet shows an aerial photo of the White House from the north side, allegedly taken on the same day, but the trees surrounding the president's residence have no leaves. Its author, Daniel Bostic, claims that the image proves that the administration "is a propaganda machine spreading misinformation." 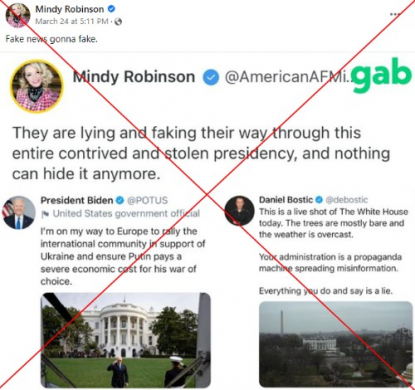 The claim in Bostic's tweet, which was liked 11,000 times, spread across social media as Biden traveled to Europe on a trip to bolster Western unity and ramp up unprecedented sanctions against Russia over its invasion of Ukraine.

However, the photo of Biden leaving the White House was taken on March 23. AFP photographer Nicholas Kamm captured the president as he spoke to the media before walking to the helicopter, holding his sunglasses in his hands and wearing the same suit. 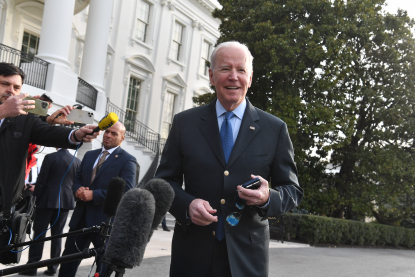 US President Joe Biden speaks to the press as he departs the White House in Washington, DC on March 23, 2022 ( AFP / Nicholas Kamm)

The trees in the background of both images are southern magnolias, as this map of the White House gardens shows. 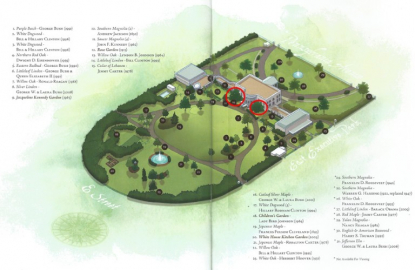 Screenshot of the gardens map available on the White House website

Southern magnolias are a "native evergreen tree," according to the US Forest Service, meaning that they keep their leaves year round. Certain species of magnolia are deciduous and lose their leaves every year.

Only the magnolias on the west side of the portico -- one of which was planted in 1830 under then-president Andrew Jackson -- are labeled in the above map. John Stanwich, the National Park Service liaison for the White House, confirmed to AFP that the east side of the portico is also bordered by a magnolia. 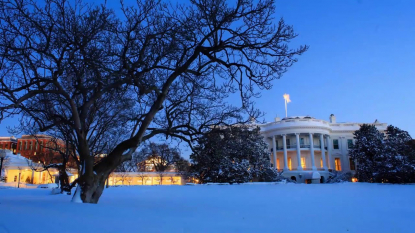 The image in the tweet suggesting the Biden photo was staged appears to be a screenshot taken from the Live White House Webcam, which streams images of the building from the north-northeast. The South Portico's southern magnolias are not visible from that vantage point.

However, other footage taken from the south side of the building, including this video exchange between Biden and reporters, clearly shows that while the magnolias display full foliage, the surrounding deciduous trees do not.