A photo has been shared on Facebook alongside a claim that it shows a Kenyan woman who appeared in court for allegedly stealing cooking oil. The claim is false: the picture shows Sibongile Mani, a South African woman sentenced for stealing money that was accidentally credited to her account by the country’s National Student Financial Aid Scheme.

“Nairobi: Woman Arraigned In Court for Stealing 3ltrs of Cooking Oil After a Sleepover (sic),” reads part of a Facebook post published on April 4, 2022, and shared more than 240 times. 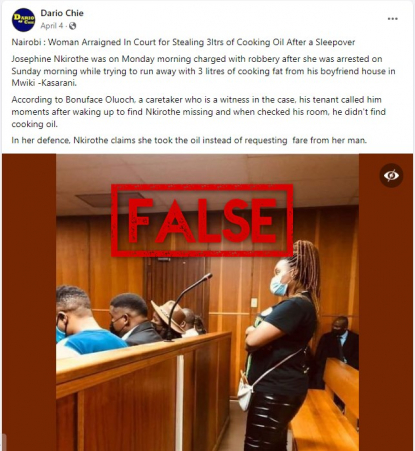 The thief, the post further claims, was arrested in Mwiki, a residential area in Kenya’s capital of Nairobi. Also mentioned are the purported names of those involved.

Beneath the caption is a picture of a woman standing in a courtroom dock with a logo for “Algoa FM News”.

The claim was also shared here and here on Facebook, and on a page impersonating the Kenyan police.

However, there is no evidence the claimed case ever took place.

Furthermore, the woman in the image is not Kenyan. She was convicted in an unrelated matter in South Africa.

No basis to story 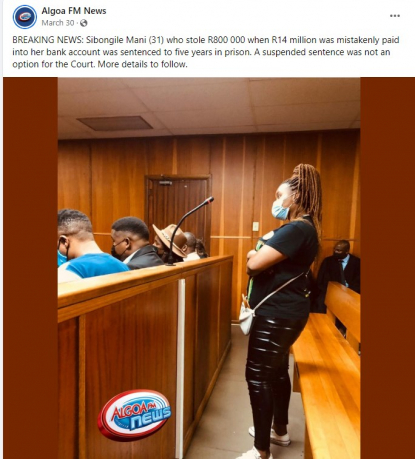 Her story was widely reported in South Africa (here and here).

Further searches using specific details such as names mentioned in the posts failed to find any verifiable reports of an incident in Kenya involving the theft of cooking oil.

However, the claim does appear to be based on a fabricated article published by Opera News, a website notorious for false and misleading stories.

AFP Fact Check asked Kenyan police to confirm the existence of a case according to the details published by Opera News. They have yet to respond.

Meanwhile, local media in Kenya have reported that the price of cooking oil in the country has more than doubled in the past two years.

The war in Ukraine has also affected global food security, driving up prices of basic items like vegetable oil.