Durex did not invent a ‘reversible’ condom, all are still single-use

Multiple posts resurfacing on social media in South Africa and elsewhere purport that Durex has created a reversible condom, made for “repeated wear”. But the claim is false: the company confirmed they have not launched such a product. Reusing a condom in this manner significantly decreases its effectiveness.

The posts on Facebook and Twitter show the picture of a blue Durex-branded box with descriptions such as “like 2 condoms in one!” and “two-sided condoms for repeated use”. 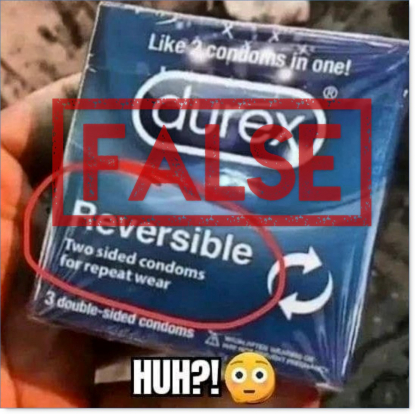 A Google search of the claim found a satirical article about an anonymous Durex product engineer who allegedly forgot a reversible prototype in the toilet stall of a bar. The bartender found the packaged condom and discovered the innovation.

But this article is pure satire. The website, “News Spoilers”, jokingly describes itself as “pre-news for a post-truth era”.

Aggregator website Opera News fanned the rumours by posting a short article suggesting that “the revirsible condom changes all what is known (sic)”.

We are aware of fabricated imagery and false reports stating that Durex has created a reversible condom. Durex condoms are designed to be used once and disposed of – incorrect use diminishes the protective effect of condoms by leading to breakage, slippage or leakage," spokeswoman Andrea Riepe said.

The US Centers for Disease Control and Prevention (CDC) confirms that a condom should not be reused and provides extensive information about how an external/male condom should be used for it to be effective.

A screenshot of the CDC information, taken on January 20, 2022

When condoms (and other barriers) are used correctly, they can reduce, though not eliminate, the risk of sexually transmitted diseases (STDs), including human immunodeficiency virus (HIV), viral hepatitis and help prevent pregnancy.

We say it because people do it: Don't wash or reuse #condoms! Use a fresh one for each #sex act. https://t.co/o3SPayRf9mpic.twitter.com/AwkPqE9YMl