A video has been viewed thousands of times on Facebook and TikTok alongside a claim that billionaire Bill Gates has "billions of doses of monkeypox vaccine on standby" as more than a thousand infections have emerged worldwide. However the video has been shared in a false context. The footage was taken during Gates' visit to a Covid-19 vaccine storage facility in Abu Dhabi in May 2022. His charity, the Bill & Melinda Gates Foundation, has told AFP that the claim is untrue.

The video shows American billionaire philanthropist Bill Gates walking through a large warehouse with shelves stacked with crates, as well as imagery of people getting vaccinated.

The post's Malaysian-language caption translates to English as: "Monkeypox is about to go viral worldwide but B.G already has a vaccine stock on standby for you all" -- referring to the billionaire philanthropist by his initials.

It goes on to suggest that Malaysian religious authorities would issue a fatwa, or a formal Islamic law ruling, and make the vaccine mandatory as it did for Covid-19 vaccines in February 2021.

The sticker text, written in a mixture of English and Malay, reads: "Don’t worry, B.G is already on standby with billions of monkeypox vaccine doses..." 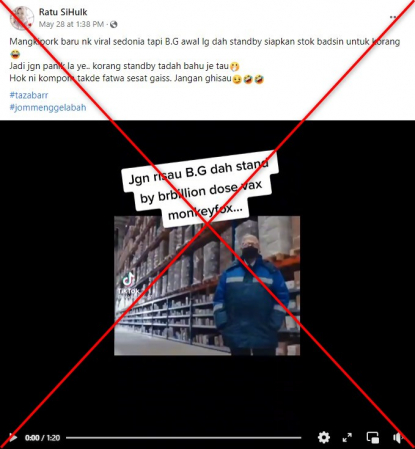 The clip includes the hashtag #StopTheTreaty -- a reference to claims that the World Health Organization's plan for a "Global Pandemic Treaty" would lead to WHO member nations ceding sovereignty of local health care decisions to the UN health agency during its annual assembly in late May 2022.

Such claims have been debunked by AFP here.

The World Health Organisation had registered more than 1,000 cases of monkeypox in 29 countries where the virus is not endemic, AFP reported on June 8, 2022.

Malaysia has yet to confirm any cases as of June 14, 2022, but health authorities said travellers from countries with outbreaks are required to monitor their health for 21 days.

The video has been viewed more than 18,900 times after it was shared alongside a similar claim on Facebook here and here and on TikTok here.

Reverse image and keyword searches found a longer version of the video had been posted to Gates' official Twitter and YouTube pages on May 18, 2022.

On YouTube, the description states: "I got to visit the HOPE Consortium’s incredible operation in Abu Dhabi to see how they’re storing millions of COVID-19 vaccines on the way to people throughout the region. It’s an amazing setup!"

It opens with a shot of him saying: "We’re in Abu Dhabi in the UAE, looking at a big vaccine warehouse."

Gates later mentions the vaccines in storage are for Covid-19.

"It’s really impressive to see millions of Covid vaccines all in one place and think we’re trying to deliver billions of these vaccines," he says.

Below are screenshot comparisons of the video in the misleading post (L) and the genuine video posted by Gates on YouTube (R): 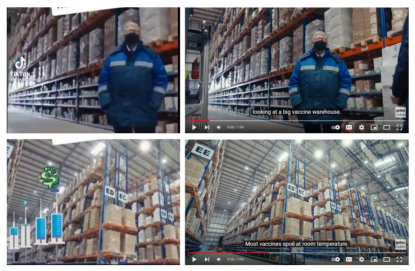 A set of screenshot comparisons of the video in the misleading post (L) and the video published by Bill Gates on YouTube (R).

Abu Dhabi-based English-language news site The National uploaded the same video to its Facebook page on May 19, 2022, with a caption that says: "Bill Gates vlogs from vaccine warehouse in Abu Dhabi."

University of Sydney virologist Edward Holmes called the claim in the posts "ridiculous".

“I can confirm that the COVID-19 vaccine cannot be used as a monkeypox vaccine," he told AFP.

Holmes said there is currently one vaccine approved by the US Food and Drug Administration (FDA) which works against smallpox and monkeypox: JYNNEOS, manufactured by Danish firm Bavarian Nordic.

The two viruses are related, but monkeypox is less severe than smallpox, which killed millions around the world every year before it was eradicated in 1980.

The United States has said it has 1,000 doses of JYNNEOS available for use.

Gates is a frequent target of misinformation -- AFP Fact Check has debunked false and misleading claims about him and the Covid-19 vaccines here, here, here and here.