A video and a photo of flash floods in the Malaysian capital of Kuala Lumpur have circulated in multiple posts on Facebook, TikTok and Twitter alongside a claim they were captured when parts of the city were inundated on May 25, 2022. This is false: the video and the photo both predate May 2022.

The 16-second video was shared here on Facebook by the Malaysian publication Sinar Harian on May 25, 2022.

The footage, which shows cars submerged in an inundated parking lot and a flooded bulding lobby, has been viewed more than 53,000 times.

Wisma UOA refers to a high-rise office building in the centre of Kuala Lumpur. 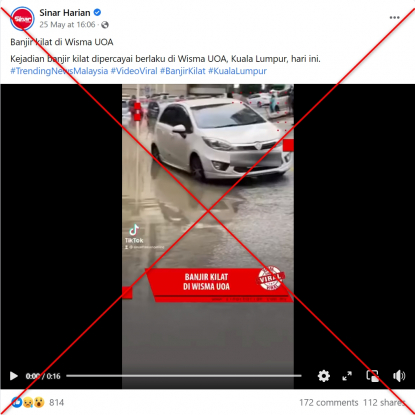 On May 25, 2022, the National Disaster Management Agency (NADMA) posted a list of roads in Kuala Lumpur affected by flooding, following thunderstorm warnings issued by the Malaysian Meteorological Department the previous day here and here.

The video was also posted alongside a similar claim on Sinar Harian's TikTok account here, where it has been viewed more than 975,000 times.

It was also uploaded on the same day elsewhere on Facebook here, here and here.

A photo of parked cars submerged in floodwater was shared on Twitter here on May 25, 2022.

"DBKL" refers to the Kuala Lumpur City Hall, while Sepang is a town located between Kuala Lumpur and the Strait of Malacca. 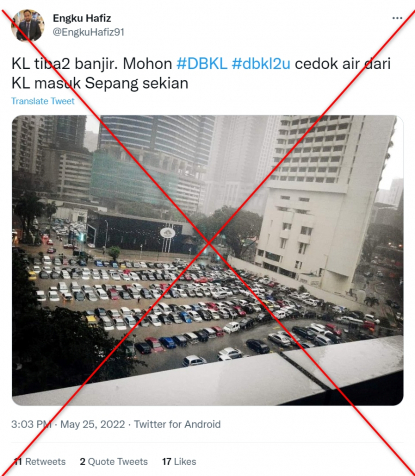 The photo has been shared more than 370 times after it appeared alongside a similar claim on Facebook here.

Both the video and the photo, however, have been shared in a false context.

A combination of reverse image and keyword searches found that the same video was shared here on TikTok on March 7, 2022.

Corresponding scenes also appeared in different videos that show flooding at Wisma UOA and the nearby Kuala Lumpur City Centre, such as here, here and here -- all were posted on March 7, 2022.

Local media like The Star and the Malay Mail also reported on the flash floods on the same day.

Below is a screenshot comparison of the video in the misleading post (L) and the genuine TikTok video (R):

A reverse image search found that the same photo has circulated online since at least 2014.

It was published by Malaysia-based entertainment portal, Hype MY here on October 2, 2014, headlined: "90-Minute Downpour Causes Catastrophe In KL."

The Star published the picture on the same day with the caption that reads: "Stranded: An aerial view of the cars submerged in water at a carpark in Wisma UOA, Jalan Pinang."

Below is a screenshot comparison of the photo in the misleading post (L) and the picture in the 2014 article (R):

AFP geolocated the video and the photo to the area around Wisma UOA and the KLCC here, as shown on Google Street View below: