Facebook posts claim that machinery used to mine lithium for electric car batteries guzzles 12 gallons of diesel fuel a minute and that France abandoned electric vehicles in favor of petroleum-powered cars. But an industry body said mining haul trucks on average consume less than one gallon a minute, and official data show the number of battery-powered electric cars in France has soared in recent years.

"Well I guess you learn something everyday if you listen. Green Energy... the machine that brings lithium up out of the ground burns over 12 gallons of diesel a Minute! France went from electric cars back to petroleum power," says text posted on Facebook on May 23, 2022 and also shared the same day on Twitter.

It is one of various claims made on Facebook questioning the green credentials of electric vehicles over the environmental impact from producing their batteries. AFP has investigated a series of inaccurate statements about batteries and electric vehicles.

The posts do not make clear what "machine" they are referencing, but numerous other posts making claims about lithium mining mention the huge trucks used in mining.

Concerning trucks, the International Council on Mining & Metals (ICMM), an international industry body focusing on sustainable development that counts major international mining companies among its members, gave a much lower figure for the amount of fuel consumed.

On average, a 300-ton mining haul truck consumes about 53 US gallons (200 liters) per hour, "and it operates about 80 percent of the day, 365 days a year," Veronica Martinez, the ICMM's senior manager of innovation and climate change, told AFP in an email.

That hourly figure works out to a bit less than one US gallon per minute. 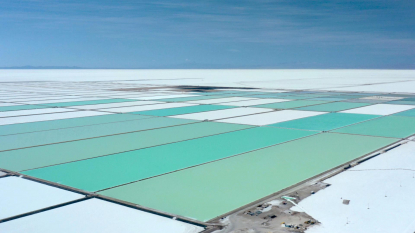 Martinez said: "Lithium has two methods of extraction: in brine where the lithium is brought up through solar evaporation in ponds, and hard rock extraction, where traditional methods of crushing, grinding and concentration through floatation are used to extract and separate the ore."

The rock extraction method "will use drilling machinery and trucks to extract, process and transport the ore at site," she said, adding that drilling and extracting lithium "is likely to be at a smaller scale than some of the larger copper/iron ore mines."

The claim that France "went from electric cars back to petroleum power" is belied by data, which show that sales of electric vehicles are surging in France and other European countries.

Like the United States and numerous other countries, French authorities say they are aiming to reduce the burning of fossil fuels in an effort to limit the effects of climate change.

The number of all-electric cars in France rose steadily from 2010 and surged by 60 percent to more than 450,000 in 2021 from a year earlier, according to the most recent figures collated and published in this graph by the International Energy Agency.

In terms of sales growth, the trend is even more dramatic. The French environment ministry said that sales of new electric cars grew 154 percent in 2020 compared to 2019. It said the rise was driven by new manufacturing regulations and subsidies for low-emission cars. 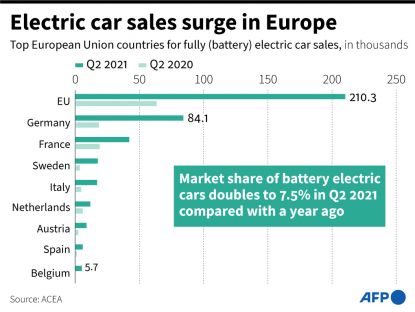 The remark on France may be related to the false claim that electric cars from a French rideshare scheme were discarded due to faulty technology.

One comment on the post also reproduced a photograph that AFP had shown to be of electric cars retired in China, not France as the user claims.