Skip to main content
Cars zoom past during rush hour on Interstate 10 after sunset in El Paso, Texas, on November 27, 2018 ( AFP / Paul Ratje)

Posts on social media suggest electric cars do not help lower climate-changing emissions because people rely on coal power to charge them. This is misleading; data shows that they still produce fewer emissions over their lifespan than gasoline-powered vehicles, even in regions where coal is burned to produce electricity for the grid.

"Coal Powered Electric Cars.... Helping liberals pretend they are solving a make-believe crisis," says the text on an image of cars at a charging station, shared thousands of times in Facebook posts, including this one from January 25, 2022. 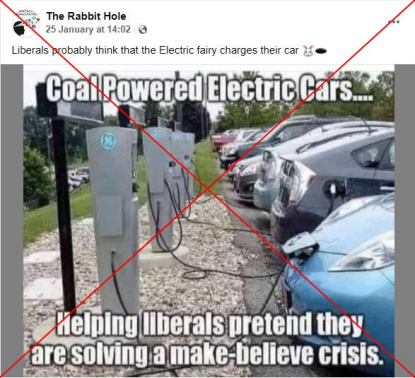 Other examples of the post appeared on Facebook here and here, while a similar claim with a different visual was posted on a climate change denial page on the social media site here.

"Research at Argonne has indicated that even for long-range EVs (300 miles), the EV, utilizing the average US electrical grid emissions rate, has a life cycle GHG emission rate of about half that of a comparable gasoline vehicle," he told AFP.

Looking only at the emissions caused by charging an electric vehicle, the difference is even starker.

The US-based Union of Concerned Scientists came up with a tool to compare the emissions of a traditional car in the United States with those of a hybrid or fully electric vehicle depending on where in the country it is charged.

The default average gasoline vehicle gets 29 miles per gallon, the tool estimates, which in turn produces 381 grams of CO2 per mile.

The CO2 impact of a similar vehicle running on electricity depends on which subregion's power grid it is charged from. People set this in the tool by entering their zip code.

For example, an electric car charged in downtown St Louis, Missouri – part of the subregion that relies the most on coal for its grid – on average will produce 247 grams of CO2 per mile -- still lower than the 381 grams of a gasoline vehicle.

In Portland, Maine – part of a subregion where coal is not part of the electric mix -- the average electric car will produce 84 grams of CO2 per mile.

A screenshot of the Union for Concerned Scientists' tool taken on February 10, 2022 shows average CO2 emissions for gasoline-powered versus hybrid and electric cars in Saint Louis, Missouri (zip code 63101)

A screenshot of the Union for Concerned Scientists' tool taken on February 10, 2022 shows average CO2 emissions for gasoline-powered versus hybrid and electric cars in downtown Portland, Maine (zip code 04101)

"Generating the electricity used to charge EVs... may create carbon pollution. The amount varies widely based on how local power is generated, e.g., using coal or natural gas, which emit carbon pollution, versus renewable resources like wind or solar, which do not," the US Environmental Protection Agency (EPA) says.

But it adds: "Even accounting for these electricity emissions, research shows that an EV is typically responsible for lower levels of greenhouse gases than an average new gasoline car."

Analysts say the trend is getting stronger as more clean energy comes online.

"EVs are less polluting than their gasoline counterparts regardless of where they charge up," said Dennis Wamsted, energy analyst at the Institute for Energy Economics and Financial Analysis (IEEFA). "And the positive emissions attributes of EVs become even more pronounced as the grid you charge from becomes cleaner," he said.

On top of their efficiency, electric cars in the United States are a more sustainable means of driving than gasoline-powered vehicles as "there are low- and zero-emission means to produce electricity," said David Reichmuth, senior engineer in the Clean Transportation program at the Union of Concerned Scientists. 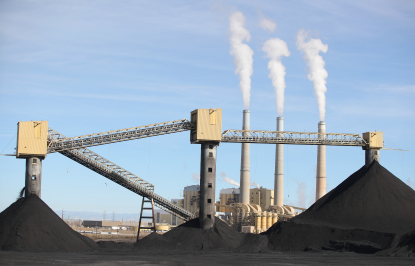 The energy mix of the US electricity grid has shifted from coal to other sources in recent years, contrary to what is implied by some social media users.

The analysis looked at studies of the carbon-emissions impact from manufacturing the lithium-ion batteries used to power electric cars, including mining the metals used to make the batteries. The studies included one by the International Council on Clean Transportation (ICCT) and another by IVL Swedish Environmental Research Institute. 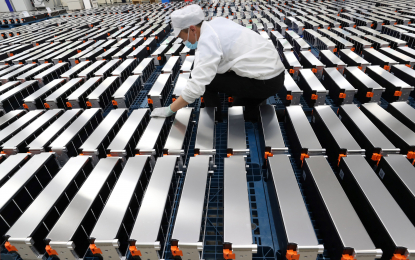 A worker with car batteries at a factory for Xinwangda Electric Vehicle Battery Co. Ltd, which makes lithium batteries for electric cars and other uses, on March 12, 2021 ( AFP / )

But the ICCT concluded that overall, "battery manufacturing life-cycle emissions debt is quickly paid off" -- after about two years, or sooner if the car is charged using renewable energy.

"Electric cars are much cleaner than internal combustion engine cars over their lifetime," it said.

AFP has previously fact-checked other inaccurate claims about electric cars.