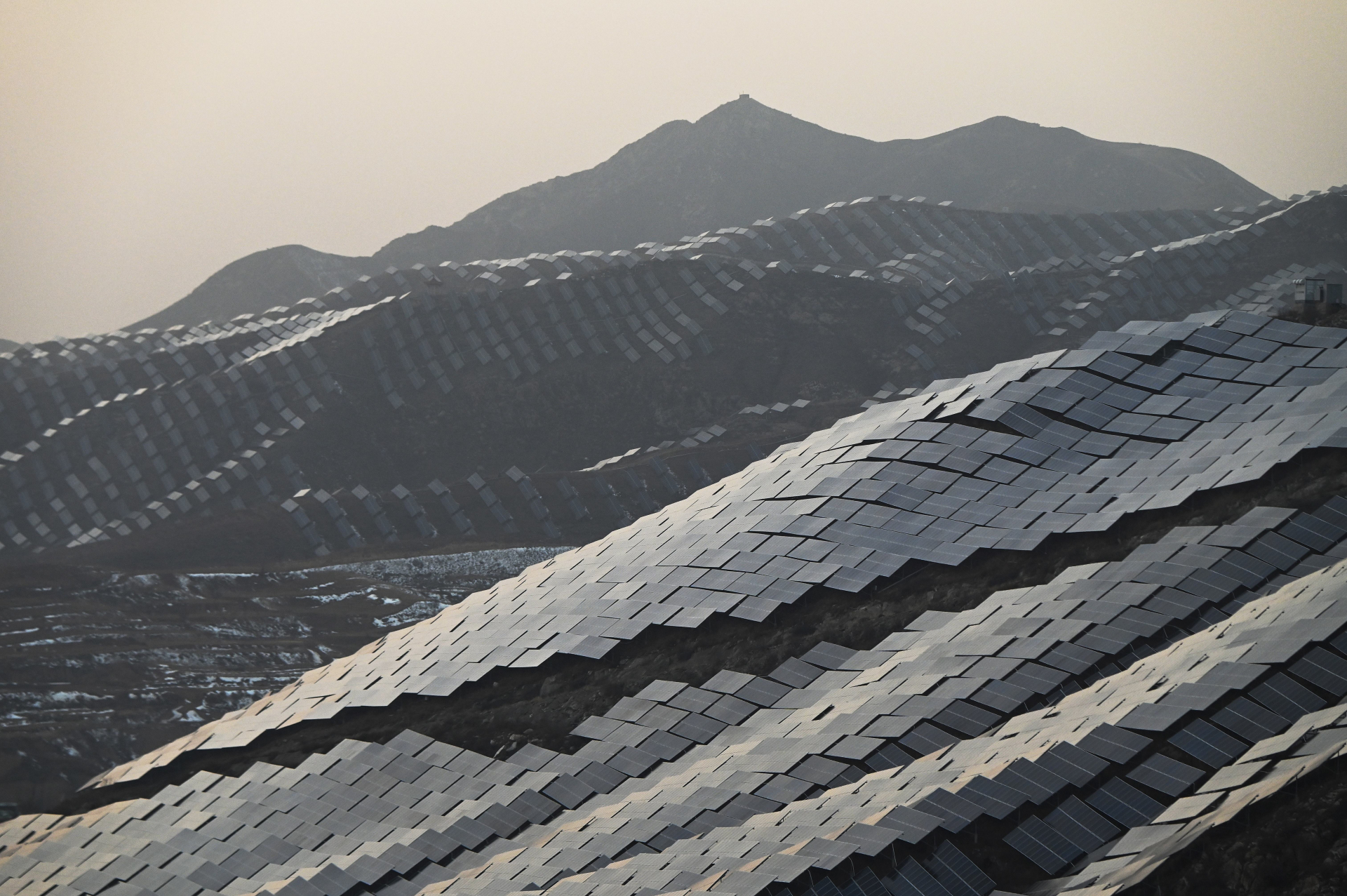 Text shared thousands of times on social media claims green energy is "more destructive to the Earth's environment than meets the eye." But the posts make various inaccurate claims, including that 40 percent of electricity generated in the United States -- and used for electric cars -- comes from coal and that solar panels or wind turbine blades cannot be recycled.

"For those of you excited about electric cars and a green revolution, I want you to take a closer look at batteries and also windmills and solar panels. These three technologies share what we call environmentally destructive production costs," says the text of a March 12, 2022 Facebook post.

The same unsourced text appears in numerous other posts shared in the United States and Canada including one on March 16 that said: "Obviously copied/pasted. I encourage you to pass it along too." 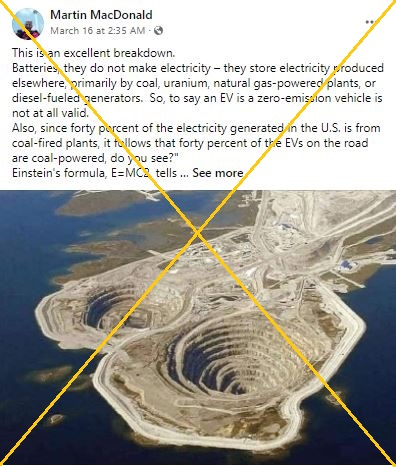 The same text, or extracts from it, also circulated Finnish and French language posts.

With the help of experts, AFP breaks down several inaccurate statements in the posts.

US electricity is 19 percent coal, not 40 percent

According to the US Environmental Protection Agency (EPA), the share of coal in electricity production overall in the United States is 19.3 percent, with natural gas, nuclear and renewables accounting for most of the rest.

"Even accounting for these electricity emissions, research shows that an EV is typically responsible for lower levels of greenhouse gases (GHGs) than an average new gasoline car," the EPA says. 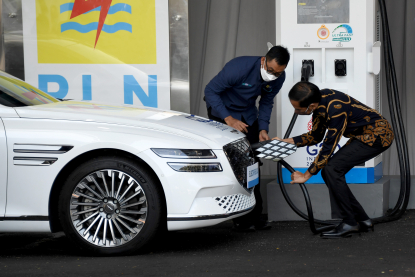 Indonesia's President Joko Widodo helps plug in an electric car at the launch of a charging station in Bali on March 25, 2022 ( AFP / Sonny Tumbelaka)

Numerous online posts have argued that electric cars driven in areas where coal is burned to produce electricity are effectively coal-powered and therefore do not emit less harmful carbon dioxide than gasoline vehicles. AFP has debunked posts on the topic here.

The study analyzed a range of environmental impacts from life-cycle stages of different vehicles, including vehicle and battery manufacturing, fuel and electricity production, as well as decommissioning.

Although battery production does have an impact on the environment, gasoline cars are also linked to the impacts of oil production, such as drilling, accidents and spills, Marko Paakkinen, research team leader at VTT Technical Research Centre of Finland, told AFP on March 22, 2022.

The thousands of kilograms of oil consumed by gasoline vehicles are "also not recyclable, unlike battery metals and most other car components," Paakkinen said.

"In any case, it's clear that the social and environmental impact of global warming is catastrophic, at a different scale than the mining of battery raw materials, and that battery electric vehicles have a much lower global warming impact than combustion engine cars," Georg Bieker, a Berlin-based researcher at the ICCT, said by email on March 28, 2022.

Reports by the UN's Intergovernmental Panel on Climate Change have detailed the threat from climate change driven by the burning of fossil fuels.

They continue: "It should concern you that all those toxic components come from mining... All told, you dig up 500,000 pounds of the earth's crust for just - one - battery." The quantity is equivalent to about 227 metric tons.

Paakkinen judged the figures "roughly correct," but said some of appeared to have been rounded up and are "gross generalizations." Specifically, he said the amount of copper cited, equivalent to about 90 kilograms, seemed too high. 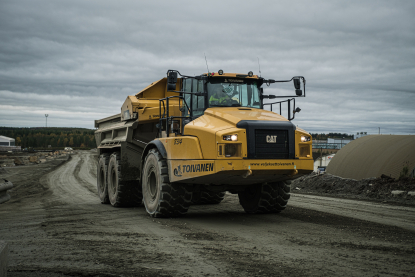 "In terms of mining, the figures seem to assume open pit mining and the calculation does not take into account that, for example, 95 percent of cobalt is produced as part of the mining of another metal, so the ore needed is mined only once," Paakkinen said.

The posts also assume that all electric car batteries would be so called NMC batteries, comprising nickel, manganese and cobalt. US manufacturer Tesla has shifted to produce around half of their cars with LFP batteries, Paakkinen said. "They use lithium, iron and phosphate as critical raw materials, and are therefore more environmentally friendly than NMC."

Bieker agreed that the posts overestimate the numbers for the batteries' chemical ingredients. "Not all of these materials are toxic and not all are from mining," he said.

He also said the posts misframe the impacts of extracting different energy sources.

The posts are correct in their claim that about 68 percent of global cobalt production is in Democratic Republic of Congo (DRC), where children are employed in mines, he said. 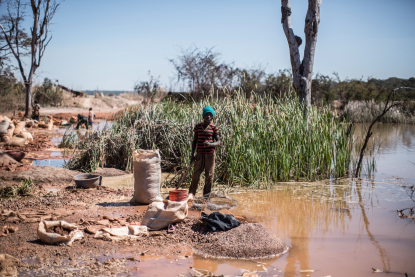 "However, 80-85 percent of that cobalt mining in DRC is in large scale, industrial mining and 15-20 percent is in informal, artisanal mining. Child labor, as well as bad labor conditions, are mostly a topic for that smaller share of artisanal mining," Bieker said.

The posts highlight "some negative social impacts of battery raw material production while implicitly saying that sticking to the fossil alternatives is better. This is certainly not correct," he added.

"It's a common narrative to point the finger at the negative impact of battery raw materials mining while not also being critical about the specific alternatives or about our consumption in general. Nevertheless, it is correct to demand improvements."

Some of the posts feature a picture of a massive open-pit mine. A reverse image search reveals that the photograph shows the Diavik mine in Canada which is mined for diamonds, not for any of the minerals outlined in the posts.

Solar panels can be recycled

The posts also comment on solar or photovoltaic (PV) panels, claiming that they "cannot be recycled."

This is incorrect. According to the European Environment Agency, 95 percent of the materials in solar panels can be recycled.

Aapo Poskela, research partner at the University of Turku in Finland, says it is true that economically viable methods of recycling large amounts of panels have so far been lacking. But this is mainly because the panels installed in the early 2000s are only now reaching the end of their lifespan. 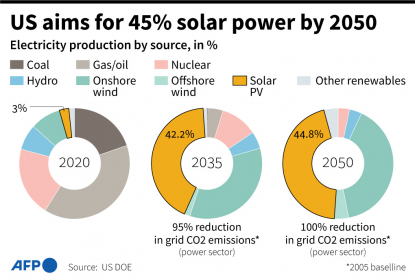 Graphic of US electricity production by source for 2020, 2035 and 2050, according to a US Department of Energy study ( AFP / Jonathan Walter, Paz Pizarro)

"The quantities of solar panels produced at that time were so small that established practices have not yet emerged." But today, the recycling of solar panels is being researched and developed in universities and companies, Poskela told AFP on March 23, 2022.

"I would be very surprised if a panel bought today is not recycled at the end of its life," Poskela said.

The posts give a list of raw materials supposedly required to produce PV panels.

"The main problem with solar arrays is the chemicals needed to process silicate into the silicon used in the panels," it says, citing a list of hazardous chemicals. Poskela said the list "seems to be very exaggerated."

"It is my understanding that a typical silicon extraction process requires only quartz, coal and wood chips as raw materials," Poskela said. 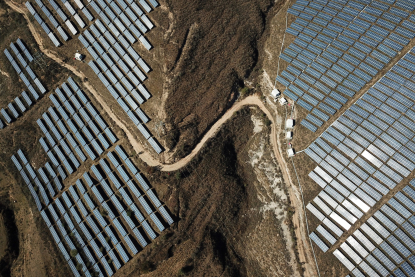 He said the "hidden" effects of renewable energy are a recurring theme in the writings of those who oppose it.

But unlike a coal-fired power plant, for example, a solar panel does not emit any more carbon dioxide itself after it has been built. A 2017 study published in the scientific journal Nature Energy calculated that one gigawatt hour of solar electricity produces five tonnes of greenhouse gases, compared to 820 tonnes for a coal-fired power plant.

"I have never come across a study where solar energy has had a greater environmental impact than fossil energy," Poskela said.

Wind turbine blades can be recycled

"Windmills are the ultimate in embedded costs and environmental destruction," they say, listing materials and adding: "We cannot recycle used blades."

The European Environment Agency says around 90 percent of the mass of the wind turbines can be recycled, although the recycling "infrastructure is still under development for turbine blades."

Studies in recent years have examined ways of recycling windmill blades. One researcher said in studies published in 2018 and 2019 that it was possible but noted the practice was not yet economically viable. But since then, companies such as GE Renewable Energy and Veolia North America in the United States have announced wind turbine blade-recycling projects. The GE-Veolia project turns the blades into an ingredient for cement. 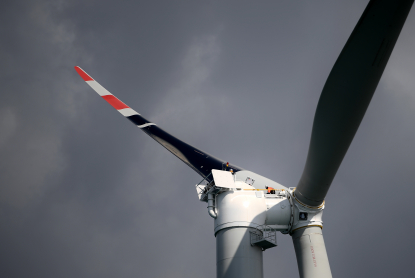 Finnish wind and solar energy company Ilmatar told AFP an average wind turbine weighs less than what the posts claim. It said wind turbine structures and their foundations may contain more than a thousand tonnes (1,102 US short tons) of steel and concrete.

"The steel is fully recyclable after use and has such a high value that there is no fear of it being left on the ground," Ilmatar said on March 24, 2022.

The posts claim that "each blade weighs 81,000 pounds" (36.7 tonnes). Ilmatar says the weight is on average less than that, at around 20 tonnes per blade for a modern wind turbine.