After Russia invaded neighbouring Ukraine, a video was viewed millions of times in multiple Facebook posts that claimed it shows fighting between soldiers from the two countries. In fact, the video has circulated online since 2010. A visual analysis of the clip found it corresponds with a raid by American and Iraqi troops on a shrine in Iraq in 2004.

It was shared here on Facebook on February 24, 2022 -- the same day Russian President Vladimir Putin announced Russia was launching a "military operation" in Ukraine.

The footage -- which has been viewed more than three million times -- appears to show a squad of soldiers firing their weapons as they move through a square.

They can be heard receiving English-language orders.

The text at the end of the video reads: "Task Force Viper & the 36th Commando Bn Killed 4 enemy, Captured 25 enemy and secured the Shrine intact." 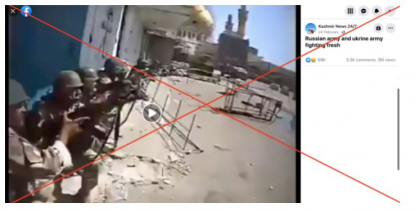 Thousands of civilians, including dozens of children, have been killed in Ukraine since Russian troops invaded.

More than 10 million people have been displaced by the conflict, which has entered a second month.

The video was shared alongside a similar claim on Facebook here and here.

A reverse image search on Yandex using keyframes from the video shared on Facebook found this nine-minute 49-second video uploaded to YouTube on September 7, 2010.

The text seen at the end of the video shared in the misleading Facebook post can be found at the 39-second mark of the second video. 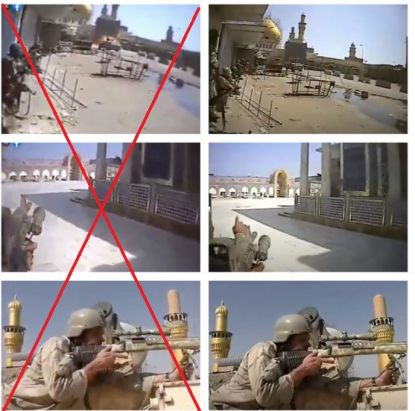 A comparison of the video used in misleading posts (left) and the YouTube videos (right).

The descriptions for these videos read in part: "Raid to sieze [sic] the Golden Mosque, Samarra."

The "Golden Mosque" in Samarra is the Al-Askari shrine, one of the holiest places in Iraq for Shia Muslims.

The mosque's golden dome can be seen at the five-minute eight-second mark of the first YouTube video, and its appearance matches an AFP photo taken on October 2, 2004. 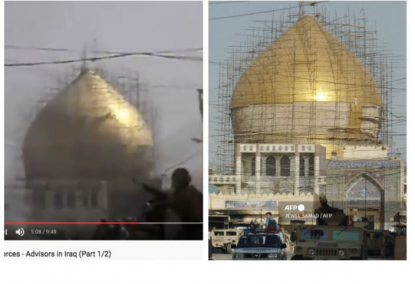 A comparison of the shrine as it appears in the YouTube video (left) and the shrine in an AFP photo taken in 2004 (right).

A video with the same footage was uploaded to YouTube here on August 29, 2020.

The video description refers to a raid on the "Golden Mosque" and says it "took place on October 1, 2004 as part of the Battle for Samarra, also known as Operation Baton Rouge".

The 36th Iraqi Commando Battalion and US special forces troops were involved in the raid, according to the video's description.

AFP reported on the operation here.

Iraqi and US troops

A visual analysis of the sleeve patches seen on the soldiers' uniforms found they match those used by the 36th Iraqi Commando Battalion and US troops.

Below is a screenshot of the sleeve patch on one soldier's uniform, where the Iraq flag and number ‘36’ -- representing the 36th Battalion -- are visible. 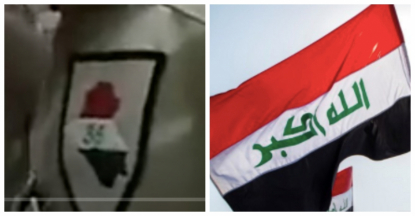 The sleeve patch seen on a soldier's uniform in the video (left), and the flag of Iraq (right).

The same sleeve patch is listed here on a military surplus shopping website, which says it was used from 2003 to 2005.

Below is a screenshot of a sleeve patch on another soldier's uniform in the video (left) and an AFP photo of the American flag: 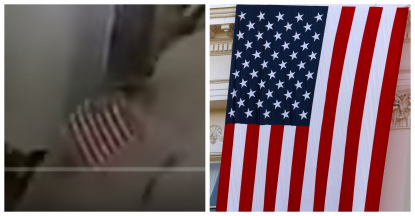 AFP also debunked earlier claims that this footage depicted clashes between the Israeli army and Palestinian militants at Jerusalem's Al-Aqsa mosque in May 2021.

There has been a wave of disinformation surrounding the conflict in Ukraine since Russia's invasion of its pro-Western neighbour. AFP has debunked the most viral inaccurate claims here.