A video has been viewed thousands of times in multiple Facebook and Weibo posts alongside a claim it shows Russian troops blowing up a military convoy carrying US-supplied weapons to Ukraine. However, the claim is false; the clip in fact shows computer-generated imagery from a war video game called ARMA 3.

Its traditional Chinese language caption translates in part as: "The huge convoy of weapons and ammunition supplied by the United States wanted to sneak into Ukraine at night!

"After detecting them with full use of night-vision targeting equipment, Russia launched missiles in the air to strike accurately, and blow up all of them!"

The clip appears to show missiles blowing up tanks and trucks in the distance at night, sending debris flying into the air. 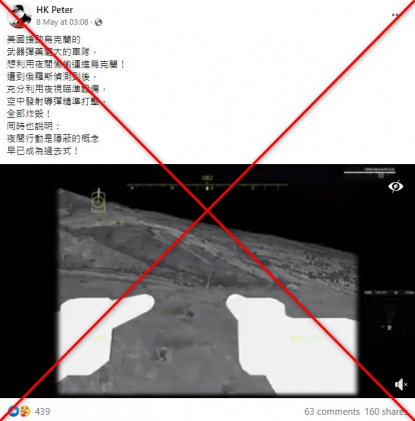 The video began to circulate online after the White House on April 28 called on the US Congress to provide additional support for Ukraine, including military resources.

On May 19, Congress approved a nearly $40 billion military and humanitarian aid package for Ukraine – an "unprecedented" sum that US legislators say will help Kyiv defend against Russia’s continued invasion.

The identical video alongside similar claims was also shared on Facebook and Weibo.

However, the video's claim is false.

ARMA 3 is a war-themed video game released by the Czech-based developer Bohemia Interactive in 2013.

"This simulation shows how a double-barreled tank annihilates T-72 tanks and various armored vehicles. REMEMBER THAT THIS IS A SIMULATION," the video description reads.

Below is a screenshot comparison between the video seen in the misleading post (L) and the YouTube video uploaded by CHAOS (R): Screenshot comparison between the video seen in the misleading post (L) and the YouTube video uploaded by CHAOS (R).

A spokesperson at Bohemia Interactive confirmed to AFP the video seen in the misleading posts shows in-game footage from ARMA 3.