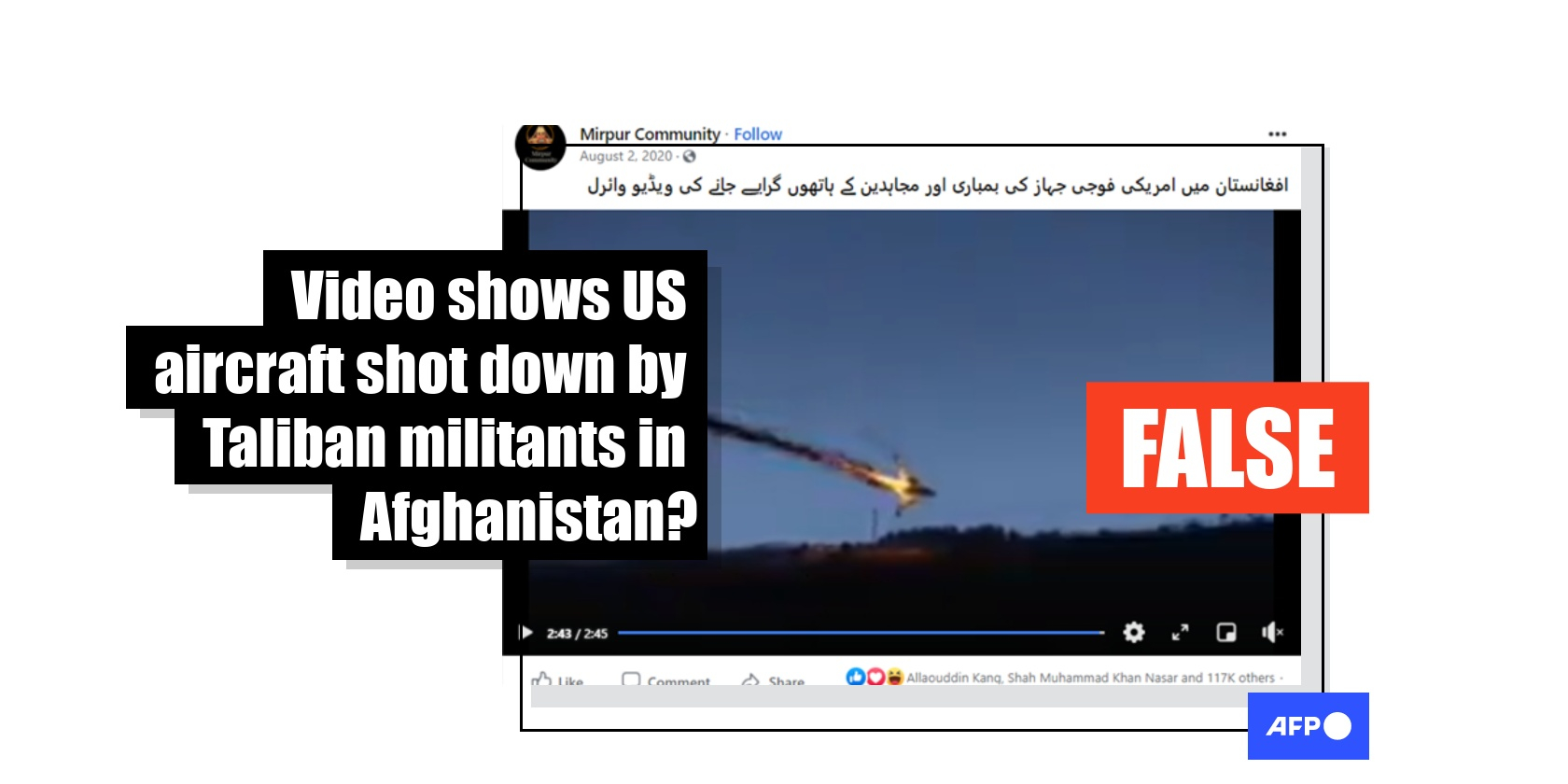 This clip actually shows computer-generated imagery from a video game

A video has been viewed millions of times in Facebook posts purporting to show a US military plane being shot down by Taliban militants in Afghanistan. The claim is false; the clip actually shows computer-generated imagery from a war video game called ARMA 3.

The post’s Urdu caption translates to English as: “A video has become viral showing the bombing by an American military plane and its shooting down by the Taliban (militants) in Afghanistan.”

The video appears to show a plane coming under heavy fire as it manoeuvres and releases flares before bursting into flames and crashing into a hillside. 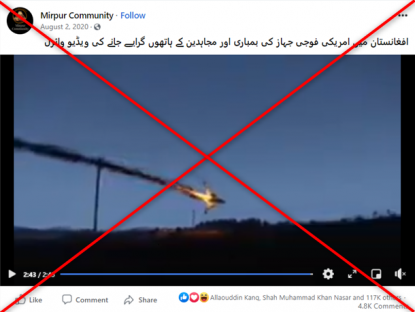 The video recirculated in April 2021 after US President Joe Biden announced he would withdraw all American troops in Afghanistan by September 11, 2021. The move prompted fears of jihadist insurgencies which could allow the Taliban to take over much of Afghanistan.

The same video along with similar claims has been published here, here and here on Facebook in recent months.

A reverse image search on Google using keyframes from the video extracted with InVID-WeVerify, and keyword searches found a longer version of the same video published here on YouTube on May 24, 2020.

The misleading video corresponds to the YouTube video between the 0:25 and 3:05 mark.

At the end of the video, Japanese text appears on the screen which translates to English as: “This video is a fiction. The characters, names, events are fictitious and have nothing to do with reality.”

ARMA3 is a war-themed video game released by the Czech-based game developer Bohemia Interactive in 2013.

Contacted by AFP, Bohemia Interactive said the video was indeed from the game.

“I can indeed confirm this to be footage captured from Arma 3. We think the aircraft in the footage is not part of our official content, but is likely a ‘mod’ (user-created content),” a company official Korneel van 't Land said in an email.

The misleading posts were published from August 2020 to April 2021 and during this span of time there have been no credible reports about US military plane crashes in Afghanistan.

The last crash involving a US aircraft was on January 27, 2020, when two service personnel were killed in the Ghazni province of Afghanistan.

The Resolute Support Mission Press Office in Kabul in an email told AFP that no shooting down of any US aircraft took place between August 2020 and April 21 in Afghanistan.

“We can confirm that no US aircraft were shot down between August 2020 to April 2021 in Afghanistan.”

Similar videos created using ARMA3 have also circulated online with misleading claims that it shows strikes in Iraq and Azerbaijan. AFP debunked the claim here and here in 2020.