The monochrome photo was posted here on Instagram on April 23, 2021. It has attracted more than 6,500 likes. 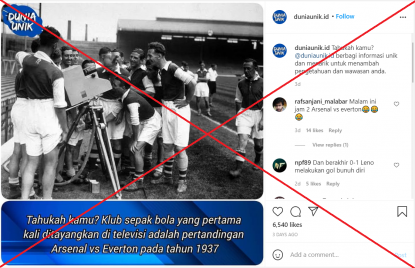 Translated to English, the Indonesian-language text underneath the photo says: “Do you know? The Arsenal vs Everton game in 1937 was the first televised football match.”

The same photo has been liked more than 7,200 times after it was shared with a similar claim on Instagram here and here, and on Facebook here and here.

A different photo has appeared with the same claim in multiple Facebook posts, including here, here and here. 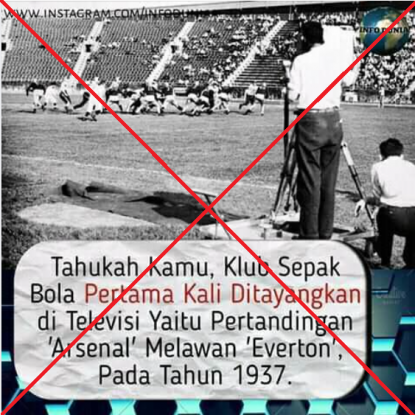 Screenshot of the second misleading post, taken on April 28, 2021

A reverse image search on Google, followed by a keyword search, found the first photo was published on the website for Getty Images here.

The photo, dated September 16, 1937, is captioned: “Arsenal Football team peering into a camera at Highbury after playing in the first football match to be filmed live on television, Arsenal vs Arsenal Reserves.”

Below is a screenshot comparison between the photo in the misleading posts (L)  and the photo on Getty Images’ website (R):

The photo also appears in this Guardian article, published on September 16, 2015, to celebrate the 78th anniversary of the event.

A reverse image search and a keyword search on Google found the second photo was published by the Associated Press here. It depicts the first televised American football game in 1939.

The photo was also published by The Wall Street Journal here on September 30, 2014, to commemorate the 75th anniversary of the event.

Below is a screenshot comparison between the second misleading photo (L) and the Associated Press photo (R):