An image shared repeatedly in Facebook and Twitter posts purports to show China’s top diplomat Yang Jiechi bowing to former US secretary of state Mike Pompeo while shaking hands during a meeting. The image, however, has been doctored: the original photo shows the pair only shook hands during the meeting in Beijing in 2018. Footage of the event also does not show Yang bowing to Pompeo.

“That’s the difference!” reads the caption on a Chinese-language tweet posted on March 19, 2021. It has been liked more than 400 times.

The image from the tweet appears to show top Chinese diplomat Yang Jiechi bowing to former US Secretary of State Mike Pompeo.

The tweet also shares an image of cartoon animals arguing in a boardroom, apparently in contrast to the picture of Yang and Pompeo.

The third image shows US and Chinese officials holding talks on March 18, 2021, in a similar pose to the cartoon characters. 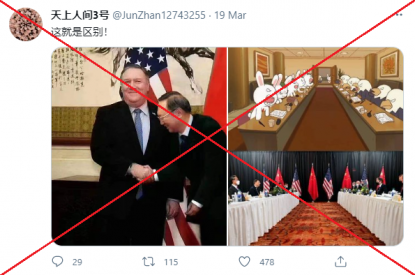 Diplomats clashed in their first face-to-face meeting since President Joe Biden took office. Yang attacked the incumbent US Secretary of State Antony Blinken, saying the United States "does not represent international public opinion, and neither does the Western world."

A reverse image search on Yandex alongside a further Google keyword search found this photo published on the official website for Getty Images, dated October 8, 2018. 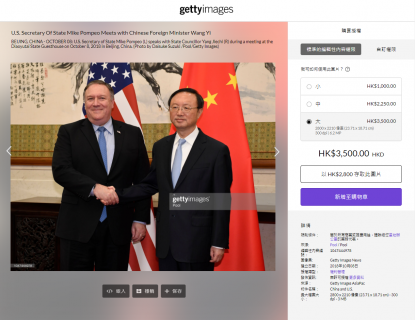 Screenshot taken on April 28, 2021, of the Getty Images photo

Yang can be seen standing upright with Pompeo while the pair shake hands.

Below is a screenshot comparison of the misleading Twitter image (L) and the Getty Images photo (R):

A video of the pair’s handshake posted on YouTube by AP news agency also shows that Yang did not bow to Pompeo.