As Russia pressed on with its invasion of Ukraine, a video clip was viewed thousands of times in Facebook and YouTube posts that claimed it showed live footage of the fighting. In reality, the footage was taken from a combat video game called ARMA 3.

The video, viewed more than 5,000 times, shows artillery firing missiles at fighter jets alongside the text "BREAKING NEWS" and "LIVE". 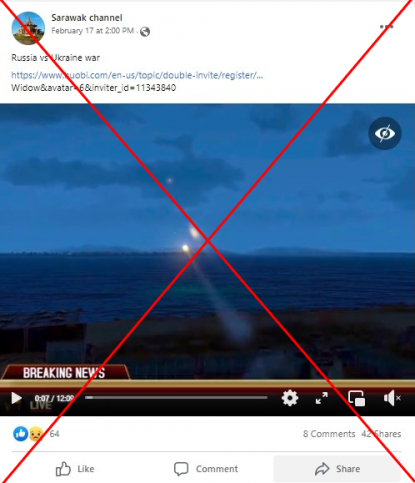 More than half a million people have fled Ukraine since Russia launched a full-scale invasion on February 24, shelling the second city Kharkiv as residents in the capital Kyiv braced for an assault on March 1.

"Russia's good at dodging those bullets," one person commented.

"Great that the two aircraft from Russia exploded, serves them right," another wrote.

A reverse image search found the scenes in the video in various YouTube videos here, here and here posted between December 2020 and January 2021 on the same channel.

The description of the channel, Compared Comparison, states it creates "modern and realistic cinematic war films".

The owner of the YouTube channel told AFP the video showed computer-generated images.

"That video clip was created by me and by using ARMA 3. Sadly, many people upload my videos somewhere else and claim it as real footage," he said.

Below are screenshot comparisons of the video in false posts (left) and clips from the 'Compared Comparison' YouTube channel (right).

Bohemia Interactive said the video in the false posts was taken from ARMA 3.