A video has been viewed tens of thousands of times in multiple social posts that claim it shows a crowd telling former Pakistani prime minister Imran Khan to go away when he was giving a speech in May 2022. The video, however, has been edited to add anti-Khan chants. The audio matches protesters' chants in a video of a rally against Khan in the Pakistani city of Lahore in March 2022, weeks before he was deposed.

The 36-second video shows a crowd of men with the voice of former Pakistani prime minister Imran Khan off camera saying in Urdu: "First thing's first, for which we're preparing, I am inviting everyone to Islamabad. God willing I will also see you in the Multan rally on Friday."

The crowd appears to chant in English: "Go, Imran, go!" -- indicating they want him to leave. The chant has previously been used by Khan's critics in the Pakistan National Assembly, local newspaper Dawn reported.

The post's Urdu-language caption reads: "Lahore's lions didn't let Niazi [Imran Khan] to get on the stage, he kept talking off-stage. During the speech, they chanted 'go, Imran, go' and some lawyers kept him subdued, so they could slap him and throw shoes at him." 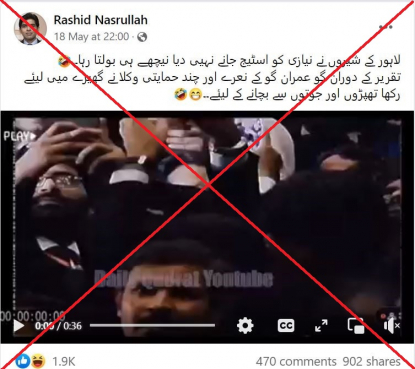 Khan, chairman of the Pakistan Tehreek-e-Insaf (PTI) party, gave a speech at a lawyer's convention in the Pakistani city of Lahore on May 18, 2022, Dawn reported.

He held a rally in Multan, another city in Punjab province, two days after his appearance in Lahore.

Khan continues to hold rallies across the country, often attended by thousands of supporters, since he was removed from office in a parliamentary no-confidence vote on April 10, 2022.

The video has been viewed more than 18,000 times after it also appeared with a similar claim on Facebook here, as well as on Twitter, YouTube and TikTok.

However, the video has been doctored to add chants against the former prime minister.

A keyword search found a longer video was published here on YouTube by Urdu-language newspaper Daily Qudrat on May 18, 2022.

The nearly four-hour long video shows Khan making his way onto a packed stage amid cheers at the 2:41:50 mark.

The part that corresponds to the video in the misleading post begins at the 2:46:48 mark.

Khan can be heard delivering a speech in the genuine video, but no anti-Khan chants can be heard in the background.

The same scenes are visible at the 3:03 mark in this video by local media outlet Samaa News, which does not show the crowd telling him to go away either.

Below is a screenshot comparison of the video in the misleading post (L) and the genuine Daily Qudrat footage (R):

The anti-Khan chants correspond with the audio in this video of a protest against Khan, published by Pakistani broadcaster Capital TV on March 6, 2022 -- weeks before his ouster.

The video's Urdu-language title reads: "WATCH!! Chants of 'Go Imran Go' on the roads of Lahore."

AFP found no credible reports that Khan was "subdued" or "beaten" at the May 2022 event in Lahore, as claimed by the misleading post.