Multiple social media posts claim South Africa's Transport Minister Fikile Mbalula said the country boasts the best drivers because its roads are full of potholes. This is false; while potholes do plague South Africa’s roads, the quotes attributed to Mbalula, who denied them, come from a satirical article.

A Facebook post shared on April 19, 2022, includes a screenshot from an article that includes a picture of Mbalula behind a lectern.

“Potholes can help you become a better driver,” reads the headline, adding that "South Africa has the best drivers in the world.” 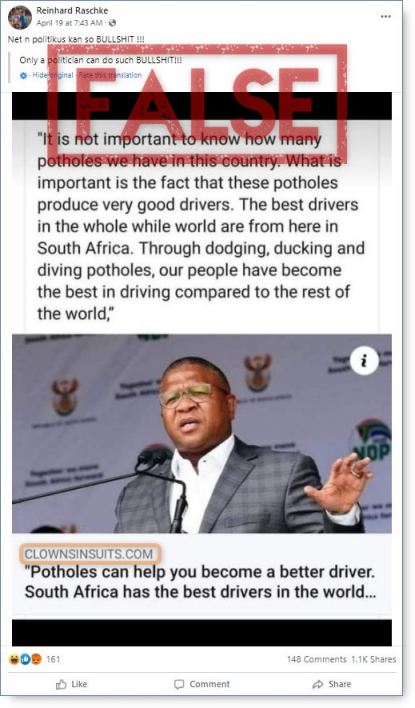 In Afrikaans, the post’s caption translates to: “Only a politician can BULLSHIT like this!!!”

The article claims Mbalula said that “through dodging, ducking and diving potholes, our people have become the best in driving compared to the rest of the world".

Some users in the comments section believed that the quote attributed to Mbalula was genuine.

Said one: “Are you saying a man with only one leg should not have a prosthesis because it helps him to hop and hobble beter? (sic) What an utter thoughtless and 'I don't care a bloody damn' approach to the problem.” 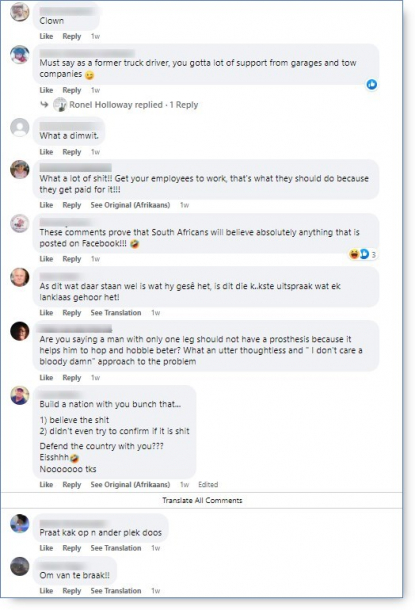 Others, however, noted the claim was meant to be read as satire.

Indeed, the claims stemmed from a website called “Clowns in Suits”, which clearly states that it is a satirical site that usually fabricates names in all of its stories, the exception being public figures.

Based in South Africa, the website predominantly satirises the country’s politicians. 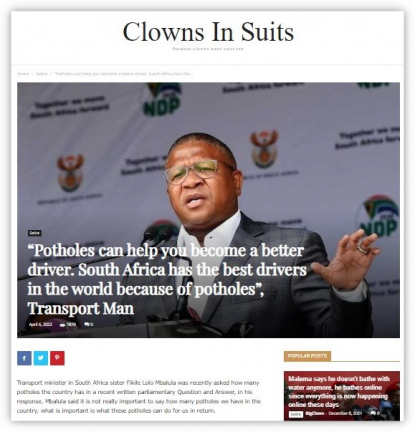 The article poking fun at Mbalula was published on April 6, 2022, and was shared more than 550 times on Facebook.

Mbalula, who became transport minister in 2019, has attracted a large following on social media over the years, and not without criticism (here and here).

He took to Twitter on April 21, 2022, to dismiss his purported quotes about potholes and drivers as “fake news”.

Still, potholes are a big talking point in a country grappling with ageing infrastructure.

Various campaigns aimed at fixing the nation’s streets and roads have led to initiatives like one announced by Mayor Randall Williams of the City of Tshwane municipality on May 3, 2022.

AFP Fact Check has debunked numerous satirical claims that were shared on social media and taken at face value, for example one about a student hacker who purportedly changed her own grades.