Undamaged windows are not evidence of staged Ukraine violence

Social media posts claim a photo shows cars damaged by a Russian bomb near a building with intact windows in Bucha, suggesting it proves violence in the Ukrainian town was staged. But there is no evidence of a strike near the building, and residents said military vehicles were used to upend the cars -- accounts confirmed by media reports and other images from the town.

"I would like to place an order for these high quality super tough windows from the Ukraine, that remained intact and unmarked after the explosion of a Russian bomb that turned over all of these cars," says text included in the image in an April 23, 2022 Facebook post that also claims: "Its all staged..." 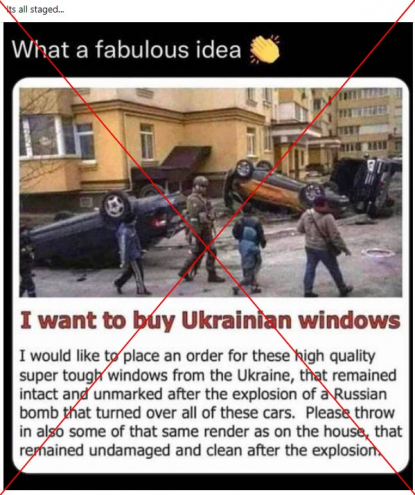 Posts sharing the same photo and asserting that the scene is "fake" or "staged" appeared on Facebook and Instagram. The image also circulated in Polish, Greek, French and Spanish posts.

The posts circulated following Russia's retreat from Bucha, a suburb of Ukraine's capital Kyiv. The area had been under Moscow's control for about a month from February 27. An AFP team arrived in Bucha on April 2, reporting widespread damage and seeing 20 corpses in civilian clothing on Yablunska Street.

Ukraine has accused Russian forces of war crimes against civilians in the area and said some 400 bodies have been found in mass graves, buried in gardens, or lying out in the open. The United Nations has documented the "unlawful killing" of some 50 civilians in the town, including by summary execution. Russia denied responsibility and has accused Ukraine of staging the bodies after its troops withdrew, a claim debunked by AFP with satellite images that show the bodies had been there for weeks.

AFP analyzed media reports and witness accounts, but did not find evidence of a bombing in the neighborhood in Bucha pictured in the social media posts.

Through a Google reverse image search, AFP found that the photo in the posts was taken on April 4 by Rodrigo Abd for the Associated Press (AP) and published with the caption: "A Ukrainian soldier walks with children passing destroyed cars due to the war against Russia, in Bucha, on the outskirts of Kyiv, Ukraine, Monday, April 4, 2022." 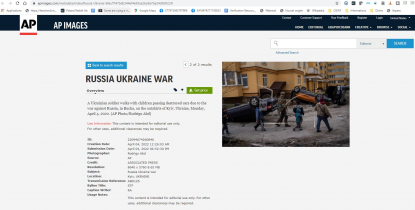 Abd told AFP that residents in the area told him Russian soldiers had commandeered the building.

"The building was one of the headquarters of the Russian army in Bucha," he said, adding that there was evidence of widespread damage across the neighborhood including marks from a tank in the mud near the flipped cars.

In addition to the photo, the AP also published a video from the same location.

Looking for buildings with a similar "L" shape on Google Earth, and using Google Street View, AFP geolocated the building in the square bordered by Tsentralna, Sadova, Vodoprovidna and Yablunska streets.

Screenshot of a 2015 Google Street View image of the housing estate at 33 Central Street in Bucha taken on May 5, 2022

More photos from the same location on different days were published by the Reuters news agency and Getty Images showing damaged cars and debris on the ground outside the building.

An April 7 report from Reuters about the apartment building cites at least a dozen residents who described alleged killings and intimidation by Russian soldiers who occupied several flats. It does not mention any bombings.

A resident named Oleksii Tarasevich spoke to Ellinika Hoaxes, a Greek fact-checking site, about the cars seen in the photo featured in the social media posts.

"The cars in our house's courtyard were overturned by Russian soldiers. They did so to hide their military equipment," he said. "They also covered the equipment with carpets and blankets that they took after breaking into the apartments in the photo, to prevent it from being captured by satellite images or drones."

More testimony about the situation was found in photos and recordings published by members of a Facebook group for Bucha residents.

One post asking the group about the photo of the flipped cars received a reply that said:"The cars were overturned by heavy equipment, not bombs," noting a large scratch on the side of the orange car and attributing it to an armored personnel carrier or "something similar."

Another post in the Bucha residents group showed damage to a white van (circled in red below) that was parked near the orange car visible in the social media posts. 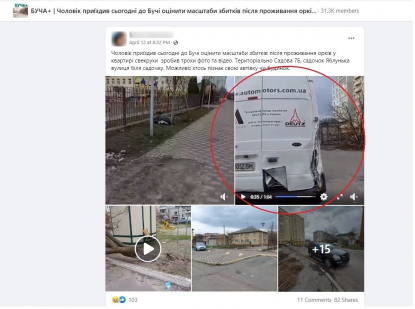 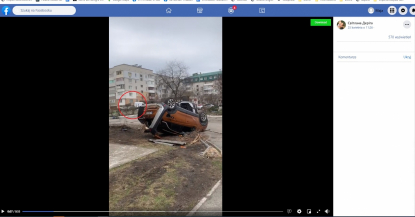 AFP called the telephone number shown on the van and reached Pavel Stanislavovich Dirinko, manager of the company, on April 26.

"This is our car, one of those stolen from our base in Bucha," he said.

"The car is battered on all sides. It looks as if a large vehicle -- a tank or an armored personnel carrier -- has crashed into it. It must have been a vehicle with wide wheels or a chain track. There are deep tracks in the soil. There are holes in the asphalt. There are scratches on the white bodywork in a dark green color," he said.

He sent the below photos of the damage.

Photos taken by Pavel Stanislavovich Dirinko and sent to AFP on April 26, 2022 show damage to a white van in Bucha

AFP showed a photo of the asphalt to military experts. Lieutenant Colonel Marcel Podhorodecki, deputy spokesman for the commander general of the Polish Armed Forces, said: "They are definitely track marks, either of a tank or an armored vehicle."

To find more witnesses, AFP searched the address of the building -- 33 Central Street -- in Google and found a medical company. Its manager, Olena Trusz, said her flat on the fourth floor "was occupied by the Russian soldiers" for a month along with other apartments. She said she left Bucha on February 26 and had only been able to return in the past week.

"Most of the apartments are now completely destroyed. I'm lucky mine is not so much destroyed. Soldiers slept there, drank all the alcohol and used my facilities," she said.

Asked if there signs of any bomb explosions in the neighborhood, as the social media posts claim, she said: "There are no traces of explosion around the building. I didn't see it when I visited it."