Seen a dramatic video of a plane crash? Here’s how to spot if it’s a flight simulation

Videos showing dramatic plane crashes regularly go viral on social media. Sometimes, however, they are actually computer-generated scenes from flight simulation programs. But that isn’t necessarily obvious when these clips are viewed out of context – for example, while scrolling through social media on a mobile phone. AFP Fact Check shares a few clues to help you quickly tell the difference between real footage and simulations.

Flight simulation fans frequently record their screens and share dramatic crashes or near-crashes on YouTube or other platforms. But viewers might not always know the context and could believe they are watching real events.

For example, a video shared on Facebook, titled “Boeing B747 Pilot Did This To Save All Passengers After Bird Strike [XP11]”, was viewed more than one million times since March 5, 2022.

The nearly seven-minute-long clip shows a Germanwings plane lifting off a runway, then trailing smoke and making an emergency landing. 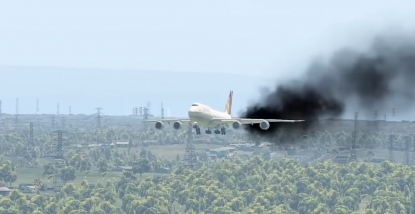 It received more than 1,200 comments, some of them calling the scene unrealistic or guessing that the video was computer-generated while others believed it was real and praised the pilot’s bravery. 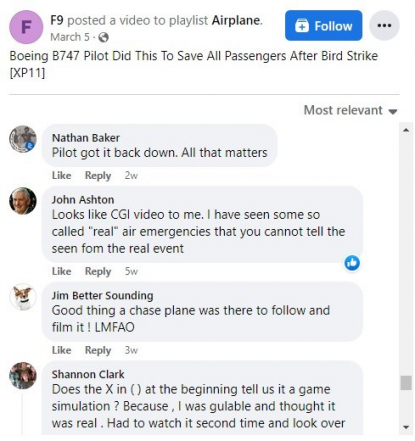 Screengrab showing just a few of the 1,200 comments on the video shared on Facebook

The images are in fact taken from the flight simulator X-Plane 11 – known to fans as XP11, which was noted in brackets at the end of the video’s title.

Another example: a video on YouTube, titled “Plane Crash Karachi ++ PIA A320”, was viewed more than 1.8 million times since 2020. It shows the crash of a flight bearing the logo PIA, for Pakistan International Airlines.

But if you click to expand the video’s description, you’ll see there is a disclaimer at the end: “All crashes created with: FSX & AFS2 & X-Plane 11”.

“We of course want the viewers to find it hard to tell the difference between the simulation and the real world,” said Scott Phillips, sales and marketing manager at the London-based flight simulation company Just Flight, which develops add-ons to make flight simulators as realistic as possible.

“If it’s easy for them to tell the difference, we’re not doing a good enough job!” he told AFP Fact Check.

Beyond flight simulators, some video games such as DCS World and Arma 3 also feature dramatic war scenes with fighter planes. We’ve debunked some of these as having been shared out of context during various conflicts, including in Afghanistan and Ukraine.

However, there are some clues that can help you spot if an air crash video is computer-generated.

Check the title and description

Flight simulation fans usually include the name of the software that they captured the video from.

The software name might be found in the video’s headline or the description below the clip, so always click through to read all the information available. 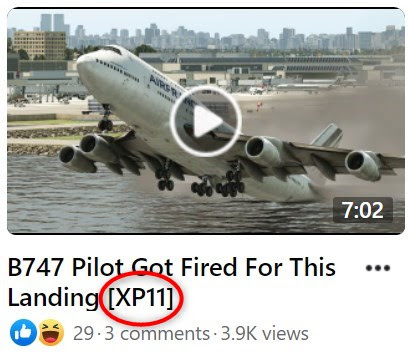 Circled in red, a reference to the flight simulator X-Plane 11 in the title of a video shared on Facebook

Facebook users sometimes tag the game they are playing but this is not always clear when you’re looking at the video within your feed. Click on the post’s time or date stamp to view the video on its own; the game tag will appear in the description if available. You can also look at the account that posted the video. Its description might indicate that they are flight simulation (often shortened to “sim”) enthusiasts, or more generally reference video games.

Expand the viewing window on your phone, computer or tablet to full screen so you can make out all the details more easily.

The bigger the video, the easier it will be for you to see if the graphics look computer-generated. Clues that you may have missed on a small screen may suddenly become apparent once you see them on a larger one.

If you only watch a few seconds or skim through the video, you may miss vital elements revealing that it’s a simulation.

“Spend a little more time watching, and if you watch the scenery, you’ll often spot repeated buildings such as [generic] houses,” said Phillips. “When the plane is in flight, it might be tricky because nowadays the sky and cloud scenery add-ons are pretty amazing and look life-like. As soon as you’re close to the ground or landing at an airport it’s usually much easier to tell if the footage is real-world or simulation.”

Videos of real plane crashes are usually filmed by bystanders or security cameras, meaning they are filmed from the ground and from a single angle.

“In our business of training pilots, we spend a lot of time looking at crashes, and video of actual airplane crashes is shot on either a phone or a security camera, like a Nest or an Amazon [doorbell] camera,” Josh Harnagel, vice president of marketing at Redbird Flight Simulations in Texas, told AFP Fact Check. “They can’t jump camera angles around like you could inside a simulation engine.”

In simulations, the angle might change from one side of the plane to the other, or from below the plane to above – as if the video were being filmed from aboard multiple aircraft flying alongside the plane.

You should also be suspicious if the camera seems to smoothly track the action.

“Real videos are low quality, they’re grainy, and the airplane is rarely at the centre of the frame. Accidents aren’t shot like a movie – you don’t get very good imagery of it,” Harnagel  said.

Here’s a video of a real incident in which a DHL plane skidded off a runway:

Now compare it to a simulation that reenacted the scene:

Listen to the sound

Turn the sound on. If the video was taken by a bystander, you would expect to hear ambient noise from the ground, like people talking or traffic sounds.

“There won’t be any background noise in a simulation,” Harnagel said. “It’ll just be the airplane noise.”

Look at the shadows

He also noted that shadows in simulations don’t look quite like shadows in real life.

“It’s really hard for the simulation engines to do the shadows really well,” he said. “You’ll see a shadow, but it does not look exactly right. They have a real sharp line, while in real life it’s a little more faded.” 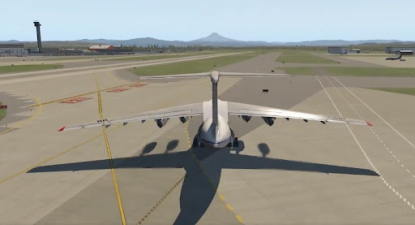 Example of a plane’s shadow in X-Plane 11

Examine the moment of impact

If the plane crashes into the ground or a building, notice how these elements interact. In a simulation, the point of impact often looks very strange.

“Game designers spend a lot of time developing the physics for the plane’s movements in-flight, but when the planes crash, the physics really break down because they don’t put a lot of effort into that,” Harnagel said. “Things don’t move the way you would expect them to move. In a simulation, when a plane crashes, there is no reaction on the ground – dirt won’t fly up, buildings won’t break or anything like that.” 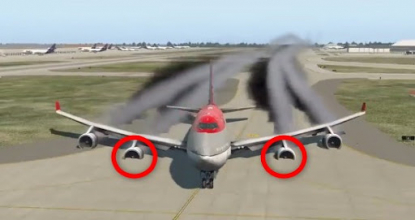 Circled in red, the moment a simulated plane partially disappears into the ground during a crash scene in X-Plane 11