Several supposedly “live” videos featuring firepower hitting buildings and shooting planes out of the nighttime sky have been shared on Facebook in South Africa with claims that they show Russia’s invasion of Ukraine. However, this is false: these hours-long videos actually show a military simulation video game called Arma 3.

One of the supposedly live-streamed videos, viewed more than 9,400 times since it was posted on February 25, 2022, features more than four hours of nighttime fighting scenes.
“Russia Vs Ukrain War Live Attack video Russia attack on Ukrain (sic),” reads the video’s caption. 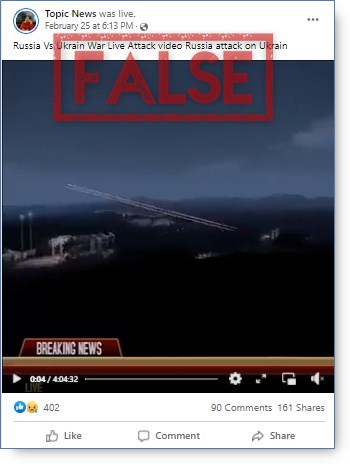 It was shared using Facebook’s Live feature, where users are meant to stream live videos in real-time, although it is actually possible to stream previously-recorded footage – or footage recorded by players during video game sessions.

AFP Fact check found other very similar “live” videos, with the same “breaking news” banner, like this 10-hours long version – shared in Nigeria – in which the user clearly notes that they are “playing Arma 3”.

However, because of the way “live” videos are sometimes displayed on Facebook, this information does not always appear on the screen, leading some viewers to believe this footage shows actual scenes of the war.

Screenshots showing the two different Facebook displays of the video, taken on March 2, 2022

Our team first spotted the false claim shared in English in the Philippines, in the form of a 12-minute long video.

Several clues can be seen in the multiple videos to indicate that it comes from a video game and not real life, including the lighting and the pixelated trees and grass that look computer-generated.

By doing a reverse image search on keyframes from the video, our fact check reporters in the Philippines traced it to a YouTube channel that shares scenes from video games.

The owner of the YouTube channel confirmed that the video showed computer-generated images.

"That video clip was created by me and by using Arma 3. Sadly, many people upload my videos somewhere else and claim it as real footage," he said.

Arma 3’s developer, Bohemia Interactive, confirmed to AFP Fact Check that the hours-long videos were taken from their simulation game and not real events.

“I can confirm both videos were taken from heavily modded Arma game falsely tagged as footage depicting the current conflict in Ukraine,” said Pavel Křižka, a representative of Bohemia Interactive.

The gaming company also warned of the viral misinformation in a tweet on February 25, 2022, and said they are in contact with the media “helping to fact-check such videos”.

Ukraine's President Volodymyr Zelensky on March 2, 2022, accused Russia, which has launched an invasion of his country, of seeking to "erase" Ukrainians, their country and their history.

In a video address, the Ukrainian leader said a missile strike on a target at the site of a Holocaust massacre shows that "for many people in Russia our Kyiv is completely foreign."

Russia had the day before shelled the Ukrainian city of Kharkiv as it pressed on with its invasion, defying mounting global pressure that saw a war crimes probe opened against Moscow, sanctions smash its economy and a FIFA ban from the World Cup.

More than 350 civilians, including 14 children, have been killed during the invasion, officials in Ukraine say.

Some 677,000 refugees have fled for safety in neighbouring countries, while around a million people are estimated to be internally displaced, the United Nations said on March 1, 2022. 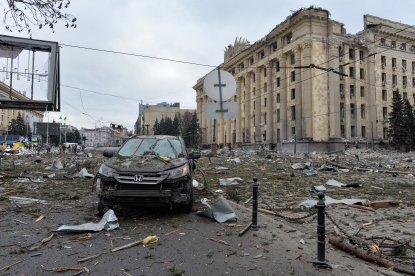 The damaged local city hall of Kharkiv on March 1, 2022, destroyed as a result of Russian troop shelling ( AFP / )

As reported by AFP, social media networks have become one of the fronts in Russia's invasion of Ukraine, home to sometimes misleading information but also real-time monitoring of a quickly developing conflict that marks Europe's biggest geopolitical crisis in decades.