Facebook posts with contrasting aerial images showing Ukraine’s capital Kyiv both untouched by war and in ruins have been shared hundreds of times with the claim that the pictures show the city before and after Russia’s invasion. The claim is misleading; while the first image of the city intact is fresh, the second showing devastation in the capital was taken about eight years ago during deadly protests that ushered in a change of government.

“The picture below shows the beauty of a city in Ukraine capital ‘Kiev’ in the morning. The 2nd picture shows the same ‘Kiev’ this afternoon after Russian invasion. Effect of war (sic),” reads the post, which was shared more than 600 times before it was deleted. Similar claims circulated with the same pictures on Facebook here, here and here.

On February 24, 2022, Russian President Vladimir Putin launched a full-scale ground invasion and air assault on Ukrainian cities. By the second day, the attacks were reported to have reached the outskirts of Kyiv, as explosions, which the Ukrainian government described as “horrific rocket strikes”, were heard.

A day later, on February 26, AFP reported a missile attack on a residential building located in the southwestern outskirts of Kyiv, near Zhuliany airport.

Despite resistance, Russian soldiers have continued to close in on Kyiv (see AFP's reporting here).

However, the image of the city in ruins is old and unrelated to the current invasion.

A reverse image search located the image of the ruined city square in media reports (see here and here) from 2014 describing deadly anti-government protests in Kyiv.

Mass demonstrations had gripped Kyiv in late November 2013 after former Ukraine President Viktor Yanukovych suspended talks on an association agreement with the European Union in favour of closer economic ties with Russia.

During the three-month-long protests, up to 500,000 protesters gathered in Kyiv's Independence Square and set up camp.

On February 18, 2014, the demonstrations turned violent after 20,000 people marched to parliament to demand Yanukovych be stripped of key powers. The picture shared on Facebook of Kyiv was taken a day later by Reuters news agency showing the aftermath (see here). The second picture claiming to show Kyiv before Russia attacked last month is a recent image captured in a video by the Washington Post and published on February 25, 2022. Despite the threat of escalating violence in Kyiv, recent video reports filmed from Independence Square by AFP (on February 24 and 25 ) also show the city centre unscathed, as does a picture taken from the same location on March 1 by AFP photographer Sergei Supinsk. 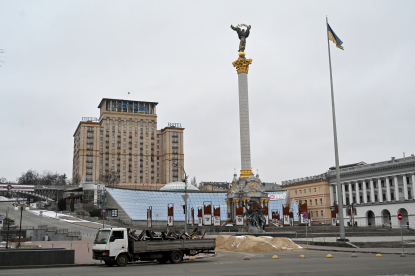 A truck loaded with anti-tanks barriers is parked at Independence Square in Kyiv on March 1, 2022. ( AFP / )