What appears to be a news graphic quoting Philippine presidential candidate Francisco Domagoso, known by his screen name Isko Moreno, as making derogatory remarks about a former political ally has been shared in multiple Facebook posts. However, the graphic is fake. The media outlet whose logo appears on the image said it did not produce it, and a representative for Domagoso denied he made the comments.

Manila Mayor Domagoso is one of ten candidates running for the presidency in May.

He ranks a far third in the most recent voter preference surveys, behind frontrunner Ferdinand Marcos Jr and Vice President Leni Robredo.

The posts appeared after Esmael "Toto" Mangudadatu, a district representative from the Muslim-led Bangsamoro region, switched his support to Robredo after previously vowing to back Domagoso.

The purported news graphic -- which bears the logo and social media pages for the Philippine broadsheet Manila Bulletin -- was posted on Facebook on April 26, 2022.

The quote, dated April 22, translates to English as: "It's not surprising that a 'Yellow' will continue to ally itself with a 'Yellow'.

"Congressman Toto Mangudadatu is a Liberal Party 'Yellow'. It's just a pity that other people in the Bangsamoro are affected by his politicking. To those Bangsamoro people that still support me, thank you very, very much".

"Yellow" is a pejorative word used to refer to members and supporters of the Liberal Party, chaired by Robredo. 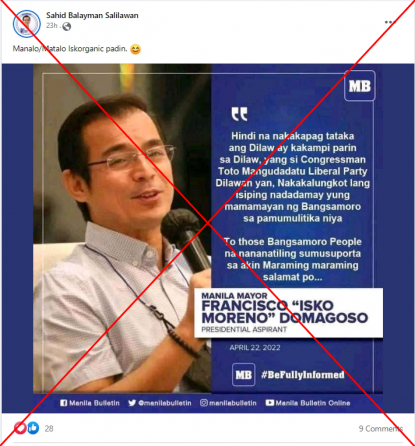 "Win or lose, we're still with ISKOrganic [Domagoso]", reads the caption on the image.

Comments on the post indicated some social media users appeared to believe its content, with one writing: "Poor Isko Moreno Domagoso. Toto Mangudadatu thinks you're weak."

"Mayor Isko Moreno has already spoken about the withdrawal of support from governor aspirant Toto Mangudadatu," another commented.

The same image was also shared in different Facebook posts here, here, and here -- however, it is not a genuine news graphic.

Manila Bulletin said the graphic was "fake" in an announcement on Facebook on April 25, stating: "Manila Bulletin did not produce this [publicity material]".

The day when Domagoso supposedly made the remarks -- April 22 -- predates Mangudadatu's public endorsement of Robredo on April 23, which was reported by multiple local media outlets, for example here and here.

Multiple keyword searches did not find any record or news reports of Domagoso discussing Mangudadatu on April 22.

Domagoso's campaign manager, Angelito Banayo, told AFP on April 27 that the remark attributed to the presidential hopeful was "fake".

He said Domagoso's actual statement on Mangudadatu's change of heart was made during a media interview on April 25.

At the seven-minute four-second mark in the interview, a reporter asks in a mix of Tagalog and English, "How do you feel about former congressman Mangudadatu supporting VP Leni?"

"I fully support and understand him. That's how you understand your people. People change their minds,” Domagoso replies.

Those comments were also reported by local media on April 25, including by GMA News, ABS-CBN, and Manila Bulletin.