A purported news graphic has been shared thousands of times in social media posts that claim it shows disparaging remarks made about Philippine Vice President Leni Robredo by a top diplomat. The claim is false: the graphic has been doctored from an original news report that contained a different quote from the diplomat.

It bears the logo of the local news organisation SMNI News Channel. It purports to show separate remarks made by Robredo and foreign secretary Teodoro Locsin Jr.

Robredo’s purported quote reads in part: “I see [President Rodrigo Duterte] on social media. But I think in crisis situations…people wait for [public officials] to be visible and say, ‘Everything is alright. We’re on top of the situation.’”

A portion of the post’s Tagalog-language caption translates to English as: “Locsin wishes VP Leni to die, but it’s Duterte who dies first for sure.” 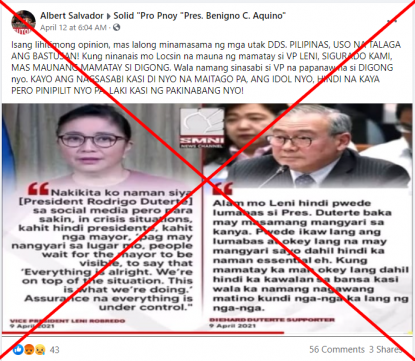 A screenshot of the misleading post, taken on April 21, 2021

The graphic circulated online after President Duterte was not seen in public for almost two weeks in April 2021, fueling speculations of ill-health. He resumed his weekly televised address on April 12, in which he dismissed the rumours about his health, Reuters reported.

Multiple keyword searches on Facebook found the graphic was digitally altered to insert a fabricated quote from Locsin.

The original graphic was published by SMNI News Channel on April 9, 2021.

It quotes Locsin as saying: “Well, Ma’am, there he is; working; and he goes through every page of all the papers; a habit from his days as a litigation lawyer/prosecutor. Even I just glance.”

Well, Ma’am, there he is; working; and he goes through every page of all the papers; a habit from his days as a litigation lawyer/prosecutor. Even I just glance. https://t.co/YGg2UWlsha

Below is a screenshot comparison of the doctored graphic in the misleading posts (L) and the original graphic (R):

In the misleading posts, Robredo’s remarks have not been changed from the quote shared in the original graphic.

In response to the misleading posts, Locsin posted a statement on Twitter on April 12, 2021 saying the remarks attributed to him were “fake”.

SMNI News Channel also said the graphic shared in the misleading posts had been manipulated.

“Any misrepresentation or unauthorised use of our logo and social media materials will be seen as a violation and shall be subject to legal action or penalty from SMNI News,” the media organisation said in a statement posted on Facebook on April 11, 2021.

#WARNING: Any MISREPRESENTATION or UNAUTHORIZED USE of our logo and social media materials will be seen as a violation...

Multiple keyword searches on Google did not find any reliable report that Locsin had made the remarks published in the misleading posts.