Multiple Facebook posts have shared a screenshot of Google Maps that purports to show South Korea’s ruling Democratic party's headquarters are situated in the North Korean capital of Pyongyang. The claim is false: the party’s headquarters are located in Seoul. As of April 19, 2021, Google had removed the fake marker for the party's offices, which the tech giant told AFP was likely added by a Google user.

The Google Maps screenshot was shared here on Facebook on April 18, 2021.

“I searched where the Democratic Party’s headquarters were on Google Maps. This is real, without a doubt. It says the party's headquarters is located right next to [North Korea’s] Workers’ Party of Korea headquarters, where Kim Il Sung Square is situated,” the Korean-language text reads in part. 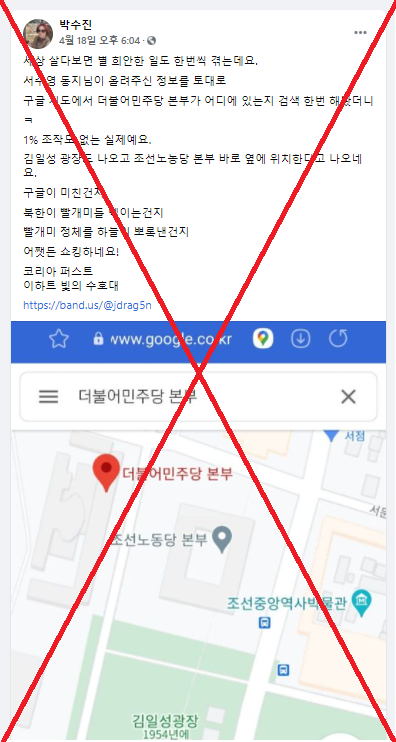 The post purports to show a Google Maps screenshot of Kim Il Sung Square in Pyongyang.

A red marker on one of the buildings in the screenshot reads “headquarters of the Democratic Party of Korea,” in reference to South Korea’s ruling party.

The same Google Maps image has circulated in multiple online posts in South Korea, including here, here and here on Facebook, and here on Korean social media platform Naver Band.

The Democratic Party's headquarters are located in the South Korean capital of Seoul, according to the party’s website. 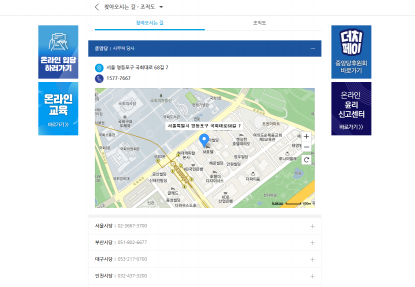 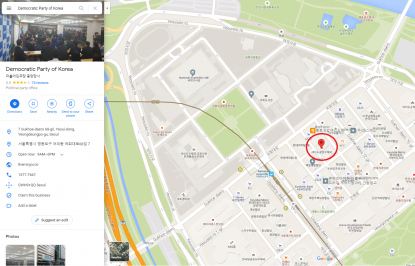 The party’s website lists the locations of its branches in each of South Korea’s 17 administrative districts. There are no branches listed in North Korea or outside of South Korea.

In a phone conversation with AFP on April 19, 2021, a Democratic Party official confirmed the party’s headquarters are not located in Pyongyang.

The Google Maps marker pictured in the misleading posts was no longer visible in Pyongyang’s Kim Il Sung Square as of April 19, 2021.

Below is a comparison between the screenshot in the misleading Facebook post (left) and a screenshot of the same location after the marker was removed (right): 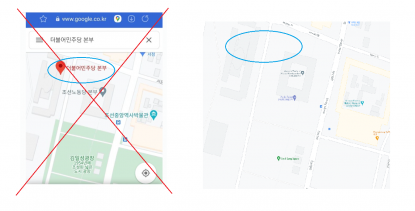 Screenshot comparison of Google Maps before and after misleading marker’s removal.

Dušan Farrington, a spokesman for Google, told AFP the false marker for party's headquarters in Pyongyang had been removed.

“Users who repeatedly violate our policies may be prevented from making further contributions to Google Maps,” he said in an email on April 19, 2021.