Skip to main content
Ferdinand Marcos Jr speaks to reporters at the campaign heaquarters in Manila on May 11, 2022. ( AFP / Ron LOPEZ)

Footage of a woman distributing a fortified bread brand in the Philippines has been viewed hundreds of thousands of times on TikTok and Facebook alongside a claim it shows a Marcos-era product that made a "comeback" following Ferdinand Marcos Jr's presidential victory. This is misleading: the video shows a bread product that was launched for a pandemic programme in November 2020 -- more than one year before Marcos Jr won the vote.

The 20-second video was shared here on Facebook on May 17.

The post's Tagalog-language caption translates to English as: "Nutribun is making a comeback because Marcos has made a comeback".

The clip shows a woman handing a product called "Enhanced Nutribun" to a group of children.

Nutribun is a bread product fortified with vitamins and minerals that has historically been used in Philippine government health programmes.

At the clip's 18-second mark, the text "ALLYCEL" is shown written in the upper part of the bread packaging.

The acronym DOST-FNRI could also be seen -- referring to the Food and Nutrition Research Institute, a Philippine government agency that develops food technology against malnutrition. 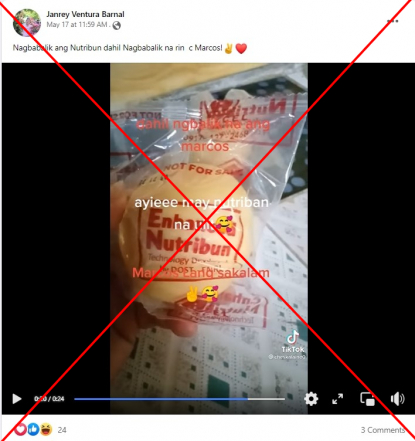 Nutribun was distributed in 1970 when Marcos Jr's late father ruled the archipelago as dictator.

It was promoted as a "convenient, nutritious ready-to-eat food snack", according to a report by the United States Agency for International Development.

According to a report by Philippine media site Rappler, nutribun remained part of succeeding governments' health programmes until 1997 when it was replaced with school-based feeding programmes.

However, multiple news reports indicate nutribun distribution had been revived in the capital Manila in 2014, in nearby Marikina city in 2019, and in the northern province of Ilocos Norte in 2020.

The same video was posted here and here on TikTok where it has been viewed more than 258,000 times.

It was also shared on Facebook here, here, and here alongside a similar claim.

Some social media users appeared to have been misled by the posts.

"To those who are against BBM, what else are you looking for? He's already giving what is beneficial to the Filipino", wrote another.

The product shown in the video predates Marcos Jr's presidential win in May 2022.

A representative from the DOST-FNRI separately told AFP that "the claim [in] the video circulating is false".

The representative sent AFP this press release about the launch of the "Enhanced Nutribun" product on July 29, 2020.

The initiative aimed to "help ease the impact of the Covid-19 pandemic crisis on the nutritional well-being of our future generation", according to the press release.

Philippine news outlets reported on the program here and here in June 2020; and the country's science agency chief posted about the program on Facebook here on the same month.