This photo shows a Hindu relic at an Indian temple, not a mosque


Multiple social media users have shared a photo alongside the claim it shows a Hindu relic found inside a mosque in India's Uttar Pradesh state. Although there were local reports that a Hindu relic was discovered at the mosque in mid-May, the photo was shared in a false context. It actually shows a religious symbol at a temple in the Indian state of Odisha.

"Congratulations to all the devotees and fellow countrymen on the discovery of a 12.8-feet shivalingam today, Monday on this historical day in Gyanvapi," reads a Hindi-language Facebook post from May 17.

A shivalingam, also known as lingam, is a phallic representation of the Hindu god Shiva, which appears in Shaivite temples and in private shrines throughout India.

Gyanvapi is the centuries-old mosque lies in Varanasi, one of the world's oldest continually inhabited cities, where Hindus are cremated by the Ganges.

The claim began to circulate online after India's local media outlets reported that a Shivalingam was reportedly found in the mosque.

A local court ordered the Varanasi district administration on May 16 to seal the spot in the Gyanvapi Mosque where the Hindu relic was allegedly found for inspection, Delhi-based daily The Economic Times reported.

A reverse image search on Google found the identical photo published here on Wikimedia Commons in 2014, which said it was taken by Monjit Paul in 2014.

By accessing the photo's metadata using the Medata2go, AFP found that the photo was taken on November 23, 2014.

Below is a screenshot comparison between the image shared in the misleading posts (L) and the photo posted by Wikimedia Commons (R). 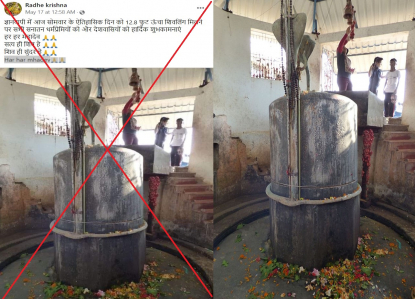 Screenshot comparison between the image shared in the misleading posts (L) and the photo posted by Wikimedia Commons (R).

The Odisha Tourism, the state's official tourism board, posted a photo of the shivalingam at the Baba Bhusandeswar Temple on its official Twitter account on June 25, 2015.

"#Bhusandeswar Temple in Baleswar district is famous for the largest Shiva Lingam in #Asia made of Black Granite," reads the tweet.

Below is a screenshot comparison between the image shared in the misleading posts (L) and the photo posted by the Odisha Tourism (R).

Screenshot comparison between the image shared in the misleading posts (L) and the photo posted by the Odisha Tourism (R).

The report of the court-appointed commission tasked with surveying the Gyanvapi Mosque was submitted on May 19, according to the English-language daily The Hindu.

The report had not yet been made public as of May 25.

However, multiple local media outlets reported on the alleged findings, citing "leaked" reports, which point to the presence of Hindu idols inside the mosque.

Meanwhile, mosque officials stated that there is no Hindu relic in the mosque and that what is inside is simply part of the complex's Wazoo Khana – facilities within a mosque where worshippers wash before prayer.

AFP has previously debunked a similar claim that a different Hindu relic was discovered at the mosque.