A photo of a vehicle attached to a tanker refuelling at a gas station has been shared thousands of times alongside the claim it shows Sri Lanka parliamentarians buying subsidised petrol after prices surged this year. But the image was shared with false context: the photo was taken in the Philippines and it was first shared in 2021.

A misleading post was shared to Facebook on May 19 with a Sinhala-language caption that translates to English as: "How will the CEYPETCO make profits like this? Not only do they steal but also take the rest of it home for the friends and family."

The post appears to refer to a news report about Sri Lankan MPs allegedly pumping fuel at subsidised rates from state-owned petrol stations, while the rest of the nation reels from rising petrol prices.

The South Asian country has been in the grip of its worst economic crisis since independence from Britain in 1948. Residents have faced shortages of fuel, food and essential medicines. 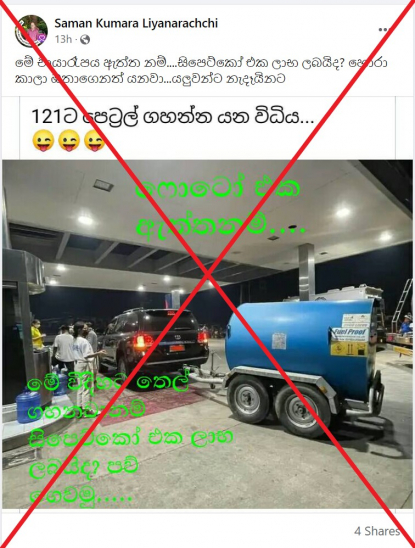 The photo was shared over 3,000 times alongside similar claims on Facebook here, here and here.

Comments on the posts suggest social media users believed the photo was taken in Sri Lanka.

One wrote: "Hope they are cursed! They not only take the subsidised fuel but exploit it for their mistresses and friends... meanwhile the common man cannot find fuel even for the exorbitant market prices they sell it at."

Another said: "Even while the country is at its worst, our parliamentarians are still only thinking of their comfort! Serves us right for voting them in."

A reverse image search on Google found the photo was shared in posts unrelated to Sri Lanka's crisis.

A Facebook user from the Philippines shared the photo on March 7.

AFP contacted the Facebook user, who said the photo was taken in the Philippine province of Cebu "after Odette".

"Odette" is the local name for Typhoon Rai, which struck the archipelago on December 2021 and killed over 380 people.

Below is a screenshot comparison of the image in a misleading post (left) and the photo shared in March (right): 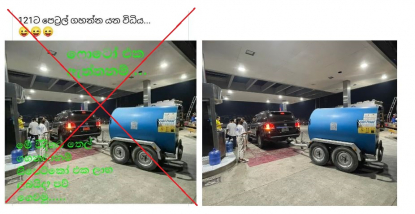 A further search of the Facebook user's account found a similar photo of the vehicle and tanker taken from a slightly different angle here on December 22, 2021.

The photo was shared alongside others that show a truck bearing the Philippine Red Cross banner that reads "Typhoon Odette (Rai) Emergency Response".

Below is a screenshot comparison of the photo in the misleading posts (left) and the December 2021 Facebook photo (right) with the corresponding features highlighted: 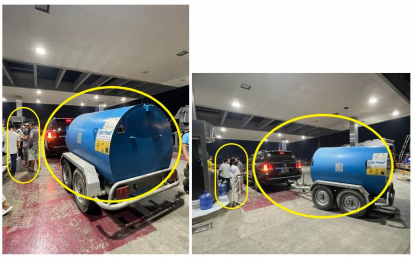 The tanker, SUV and people in the image (R) correspond with the image published on March 7, 2022 (L).