An image was shared hundreds of times on Facebook and Twitter alongside a claim it shows a Hindu relic purportedly discovered at the centuries-old Gyanvapi mosque in Varanasi in India's northern Uttar Pradesh state. In reality, the image was taken at the Ajmer Sharif Dargah, a Muslim shrine in the western Rajasthan state.

"This is the Shivalinga that was found inside the Gyanvapi Mosque which the court has ordered to be sealed," states the Hindi-language caption to the image shared on Facebook on May 16. 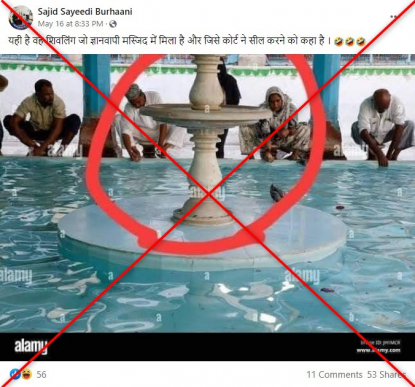 The post circulated online after reports claimed a leaked court-mandated survey of the mosque in Varanasi had discovered a shivalinga, a phallic representation of the Hindu god Shiva, AFP reported.

Since the purported discovery, Muslims have been banned from performing ablutions in the water tank where the alleged relic -- mosque authorities say it is a fountain -- was found.

The identical image was also shared over 900 times alongside a similar claim on Facebook here and here; and on Twitter here and here.

The image featured in the posts bears a watermark that reads "Alamy".

A keyword search on the Alamy stock image website led to this photo.

The photo's description states it was taken on September 7, 2016 and shows an ablution pool at the Ajmer Sharif Dargah in Rajasthan.

The Muslim shrine -- located in Rajasthan's Ajmer city -- is around 1,000 kilometers (640 miles) away from the Gyanvapi mosque.

Below is a screenshot comparison of the image in the false post (left) and the Alamy photo (right):

The photo corresponds to this Google street imagery taken from the Ajmer Sharif Dargah shrine.

Below is a screenshot comparison of the photo (left) and the imagery from Google Maps (right) with the corresponding features highlighted: