Footage shows a domestic flight in Malaysia, not 'Chinese citizens travelling to Indonesia'

Two videos have been viewed thousands of times on Facebook, Instagram and Telegram alongside a claim they show Chinese citizens wearing outfits associated with an Indonesian indigenous group on a flight bound for Indonesia's East Kalimantan province. The posts refer to a 1967 massacre of ethnic Chinese minority in Kalimantan and suggest the Chinese passengers may suffer a similar fate. The claim is false; the videos have actually circulated in social media posts and reports about a group of indigenous people from Sarawak -- a Malaysian state on the island of Borneo -- flying to the Malaysian state of Sabah. A representative for the group told AFP that both videos show Malaysian indigenous people on a domestic flight in the country.

It shows an aircraft cabin in which some passengers can be seen wearing traditional clothes associated with the indigenous groups from Indonesia's Kalimantan provinces. The post's Indonesian-language caption translates to English as: "Foreigners from China, prospective residents of IKN, have started to arrive, wearing the traditional Dayak Kalimantan costumes.

"Dayak" is a generic term referring to indigenous peoples in Kalimantan.

The Mangkok Merah tragedy -- also known as the Red Bowl incident -- was a massacre of ethnic Chinese in the northern and western part of Kalimantan in 1967 by local indigenous people.

The same video was viewed more than 2,000 times after being shared alongside a similar claim here on Telegram, and on Facebook here and here.

Another video was also shared on Facebook alongside a similar claim on May 5, 2022. The same clip also circulated with a similar claim on Facebook here and here, as well as on Instagram here and here.

However, the videos were shared in a false context.

A combined reverse-image and keyword search on Google found the identical video, published on TikTok on May 1, 2022.

The spirit ! So proud to be part of this historic event Agi idup,Agi Ngelaban! Oooo ha!

The post's caption, written in English and Iban language, reads: "The spirit ! So proud to be part of this historic event Fight while we are still breathing! Oooo ha!"

The TikTok user, who works as an AirAsia flight attendant, also posted other clips from the same event here, here and here.

Malaysian news outlet The Star published a report on May 2, 2022, with images that correspond with the TikTok video.

It was headlined: "'Orang Asal' group from Sarawak boards flight in traditional costume".

"Orang Asal" refers to indigenous peoples from Sabah and Sarawak, the two Malaysian states in Borneo.

According to the report, a group of indigenous people from Sarawak boarded an AirAsia flight to Sabah's capital, Kota Kinabalu, on April 30, 2022.

Below is a screenshot comparison between the video in the first misleading post (left) and the genuine video on TikTok (right): 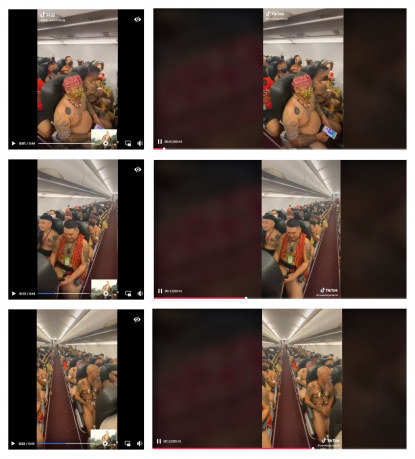 The second video was originally posted on the official Facebook page for The Borneo Post, an English-language newspaper in East Malaysia, on April 30, 2022.

The caption reads: "It was a memorable day at the Miri Airport today as 60 people dressed in traditional Sarawakian native costumes gathered to board an AirAsia flight to Kota Kinabalu.

"The group is participating in a cultural event in Sabah."

Below is a screenshot comparison between the video in the second misleading post (L) and The Borneo Post's video (R): Activist Peter John Jaban, from a coalition of indigenous people of Sabah and Sarawak, known as Gabungan Orang Asal Sabah/Sarawak (GOASS), told AFP he led the group featured in both videos.

He said: "I dismiss the claim that [the video shows] the Chinese flying into Kalimantan."

He said the group of 72 indigenous people of Sarawak flew on AirAsia Flight AK6076 from Miri, a city in Sarawak, to Kota Kinabalu on April 30, 2022.

Flight tracking websites such as Flight Radar and Flight Aware confirm Flight AK6076 is a regular AirAsia flight from Miri to Kota Kinabalu.

Below are the screenshots of flight data of AK6076 from Flight Aware and Flight Radar: 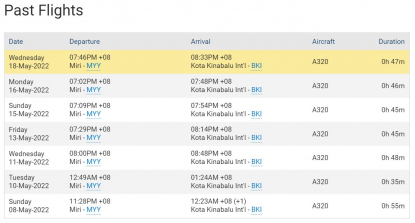