As Ferdinand Marcos Jr cranked up his campaign for the Philippine presidential election, a video viewed millions of times on social media claimed his late father, a former dictator, established a prestigious college in the capital Manila. In fact, La Consolacion College was founded in 1902, more than one decade before Ferdinand Marcos Sr was born. The video was taken from a satirical TV show.

"If you are anti-Marcos, you should not be working at La Consolacion," a TV host tells a woman in the street in a TikTok video viewed 3.7 million times.

Tagalog text superimposed on the footage appears to mock the woman: "What can you say now, girl? HAHAHAH".

The TikTok was posted on February 27, shortly after the Philippine presidential election campaign kicked off.

The son and namesake of late Philippines dictator Ferdinand Marcos Jr went on to win in the May 9 poll, securing more than double the vote of his nearest rival. 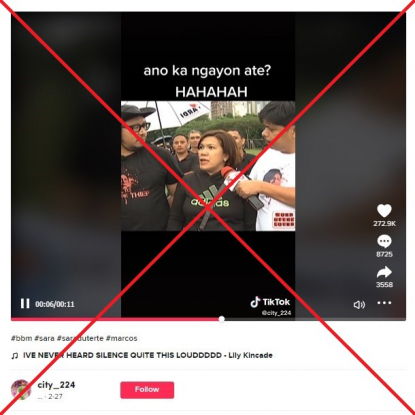 Screenshot of the false claim shared on TikTok, taken on May 13, 2022

"She is anti-Marcos, but she is benefitting from a school established by Marcos," read one comment.

"You don’t know this girl, because you did not study history," another said.

The same video was shared widely online, including here and here on TikTok and here on Facebook.

Critics and opponents accuse Marcos Jr and his supporters of trying to portray his father's two-decade rule as a golden age of peace and prosperity, highlighting infrastructure projects built during his regime while whitewashing human rights abuses and the plundering of state coffers.

However, Marcos Sr did not build La Consolacion.

A representative for the Catholic congregation that runs the school said the claim was inaccurate.

"Marcos Sr did not build La Consolacion College Manila," an official at the Augustinian Sisters of Our Lady of Consolation told AFP.

"He was not even born yet when the school was founded."

According to the school's website, it was founded in 1902 "when the Apostolic Nuncio to the Philippines offered ten Filipino Augustinian nuns a house near the Basilica of San Sebastian".

Marcos Sr was born in 1917, more than one decade after the school was founded.

Keyword searches on Google found the video shared on TikTok and Facebook was taken from an interview during an anti-Marcos protest in 2016 for the show "Word of the Lourd" on the local broadcaster TV5.

The show is known for its humourous and satirical approach to social and political discussion.

Lourd de Veyra, one of the hosts and writers of the show, said the remarks he made about La Consolacion was a "joke".

Responding to AFP's question on whether the interview was intended as sarcastic, he said: "Very much, every millisecond of it."

In the video, which discussed pro-Marcos propaganda and misinformation, de Veyra went on to accuse Marcos supporters of spreading "dumb" claims about the former dictator.

Below is a comparison of the clip in the false posts (left) and the corresponding frame in the original video (right).

False and misleading claims flooded social media in the lead-up to the May 9 Philippine elections, which AFP debunked here.