Ahead of Australia's first federal elections since the emergence of Covid-19, multiple social media users shared a claim that three political parties plan to make vaccinations mandatory if they win the May 21 vote. But the claim is misleading. An Australian university researcher who focuses on mandatory vaccinations told AFP the federal government does not have the power to force nationwide inoculations. The Liberal-National Party coalition, Labor and Greens told AFP they do not support mandatory vaccinations.

A screenshot from anti-vaccination campaigner David Oneeglio's Telegram channel was shared on Facebook here on May 2, 2022.

The text in the screenshot reads: "Liberal and Labour and Greens plan if they win this year's election is introduce new bill legislation that will be mandatory all unvaccinated people to be vaccinated".

The post goes on to say that if people refuse to be vaccinated by 2023, they will be fined and forced into quarantine by a "special team". It says that a "warrant of detainment" will be issued under the "Health Act". 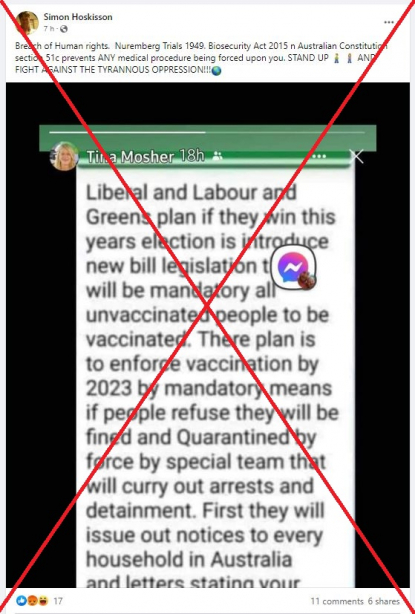 The claim spread in the weeks leading up to Australia's first federal elections since the onset of the Covid-19 pandemic.

Few countries were able to weather the first 18 months of the crisis quite as well as Australia, thanks to aggressive strategies including tough border restrictions that halted almost all travel to the island continent.

But Prime Minister Scott Morrison, who leads the conservative Liberal-National Party coalition, has been criticised over the government's pandemic response, handling of natural disasters, and energy policies.

The image was also shared on Facebook here, here, and here. Comments on the posts suggested some users were misled.

"Not a surprise…….billions of dollars spent building quarantine camps..!!!!!" reads one caption.

Another comment reads: "They can stick their vaccines where the sun don’t shine!!"

Australia's Department of Health states that Covid-19 vaccination is "voluntary – as are all vaccinations in Australia – and people maintain the option to choose".

But it adds there "may be circumstances in the future in which proof of vaccination will be required, such as border or re-entry requirements, or continued employment in particular areas".

Katie Attwell, a University of Western Australia researcher whose work focuses on mandatory vaccination policy, told AFP that inoculation mandates are a "state instrument, not a federal instrument", so the Australian government does not have the power to force people to get jabbed.

"They do not have the capacity to make that legislation and impose consequences," Attwell said in an email.

"That is why all the mandates we’ve had already have been state policies, even when they have been the product of national agreements / approaches (e.g. Aged Care Worker mandates)."

In Australia, responsibility for the delivery of preventive services such as immunisation programmes rests with state and territory governments. States and territories also handle restrictions to manage Covid-19, such as lockdowns.

Covid-19 vaccination is a condition of employment for some workers, such as those in residential aged care facilities.

Other examples of workers who are required to be vaccinated against Covid-19 include those in health care settings in New South Wales and Victoria.

A spokesperson for the coalition campaign -- which comprises the Liberals and the National Party of Australia -- told AFP that "the claim is a false, misleading and utterly irresponsible hoax."

"Mandatory COVID-19 vaccination is not the policy of the Morrison Government and never will be," the spokesperson said on May 19, 2022.

Labor also told AFP that it "does not support mandatory Covid-19 vaccinations".

And a Greens spokesperson confirmed to AFP that the party has "no intention" of introducing legislation to mandate Covid-19 vaccines.

A search for Covid-19 policies on the websites of the Liberal Party, Labor Party, and Greens did not reveal any support for universal, mandatory vaccination.

The Liberals do say they will continue the "No Jab, No Pay" policy that prevents unvaccinated families from receiving child care and family subsidies.

As of May 19, AFP keyword searches did not find any public statements by Labor leader Anthony Albanese or Greens leader Adam Bandt that support mandatory Covid-19 jabs.

Researcher Attwell told AFP she had seen no evidence of political parties pushing for mandatory vaccines.

"Indeed, it is also out of step with the fact that state Labor and Coalition governments have withdrawn most vaccine mandates," she said.

This article was updated on May 20, 2022, to add a comment from the Greens and fix a typo.