This video shows a former municipal councillor in Sri Lanka, not a minister

A video has been viewed thousands of times in Bengali-language posts that claim it shows Sri Lanka's information minister after he was attacked during unrest on the island nation over a deepening economic crisis. This is misleading; the man in the video is actually a former councillor in the Sri Lankan capital of Colombo, not a government minister.

It shows a disorientated-looking man walking along a residential street.

Later in the clip, he can be seen sitting on a doorstep while putting his hand to his head. 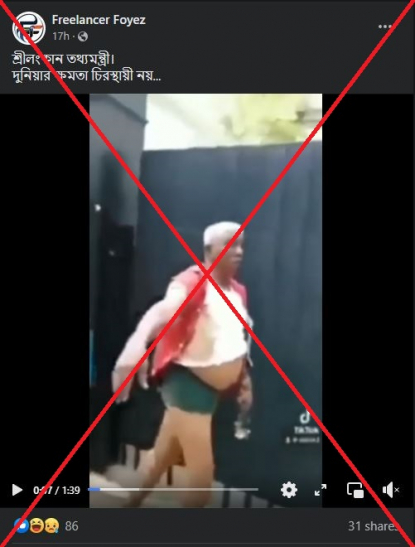 The post's Bengali-language caption translates to English as: “The Sri Lankan information minister. The worldly power is temporary.”

The same video was shared here and here on Facebook alongside a similar claim.

The same video was posted by the Sri Lankan English-language newspaper Daily Mirror on Twitter on May 9, 2022.

The post reads: “Mahinda Kahandagama, President of the Colombo Municipal Councilors 'and Employees' Union of the Sri Lanka People's Front (SLPP) participated in a protest rally in front of the Temple Trees Gate this morning in support of President Mahinda Rajapaksa.”

Mahinda Rajapaksa served as president between 2005 and 2015; on the day the tweet was published, Rajapaksa resigned as the country's prime minister.

Below is a screenshot comparison of the clip in the misleading posts (left) and the Twitter video (right):

Below is a screenshot comparison of the clip in the misleading posts (left) and a photo taken from Kahandagama's Facebook account (right): 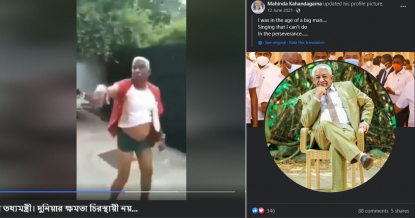 The attack on Kahandagama was also reported here by Sri Lankan media outlet News 19 on May 9.

The Sinhala-language report translates to English in part as: "Former Municipal Councilor and Chairman of the Sri Lanka Podujana Peramuna affiliated Federation of the Self-Employed, Mahinda Kahandagama has been attacked.

"It happened when he came to Colombo to attack and set fire to peaceful protesters."

A photo of him can be seen on the website of Sri Lanka's ministry of mass media. 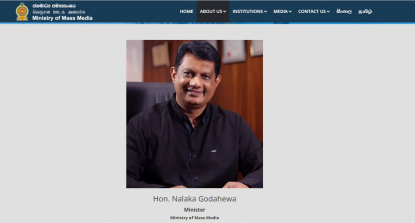 "I was not attacked, that is not me [in the video]," Godahewa told AFP.

"My home was attacked and burnt by mobs. I was not at home at the time," he added.

Godahewa also spoke about his home being burnt to the Sri Lankan newspaper Daily News here on May 12.