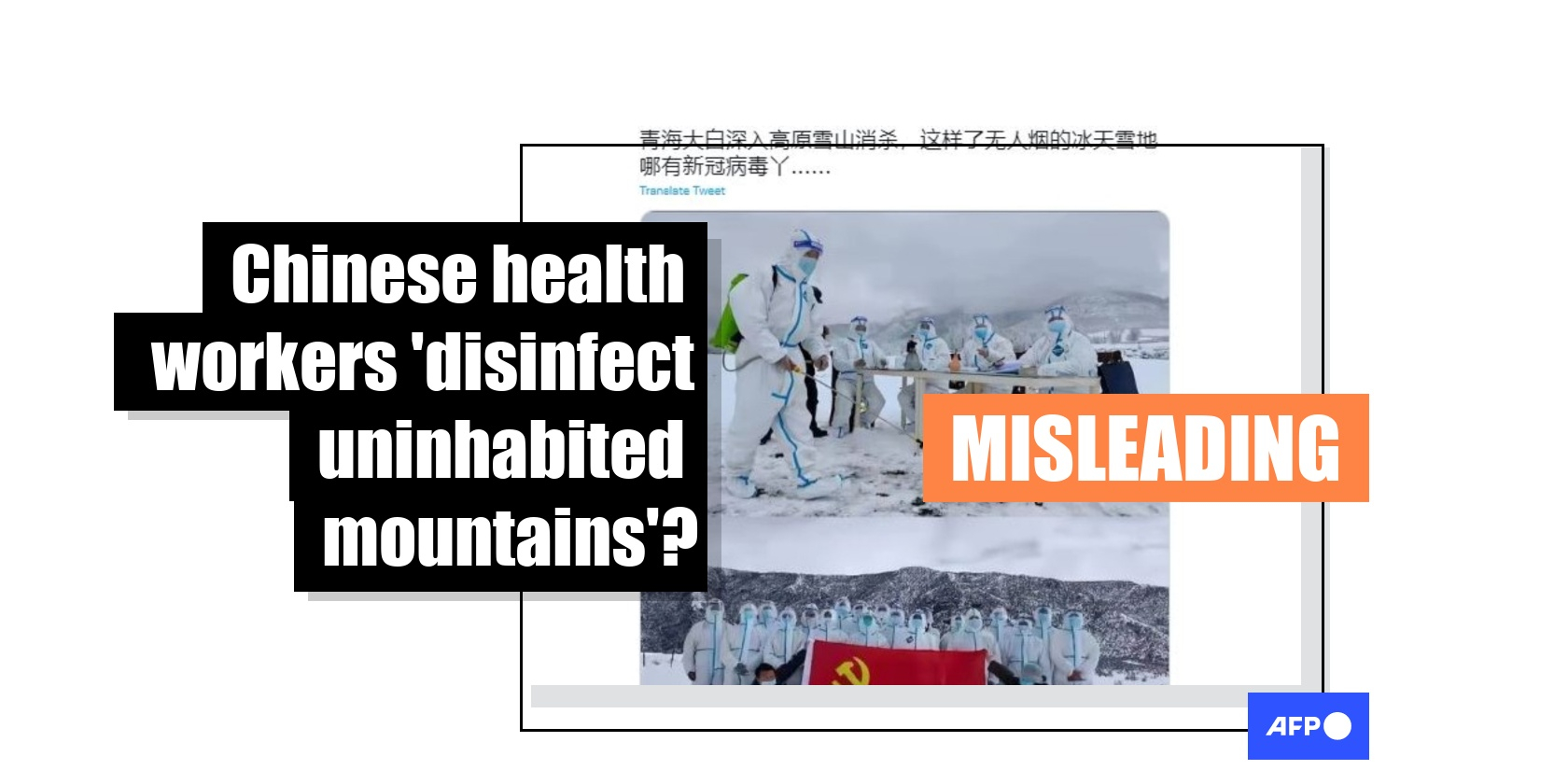 Two photos of China's "big whites" -- health workers in hazmat suits -- in a snowy expanse have been shared hundreds of times in social media posts that claim they were part of a disinfection drive in a deserted part of the remote northwestern Qinghai province. Disinfectant spraying has been part of China's arsenal in its fight against the coronavirus, but the photos were actually taken during a Covid-19 testing drive in a mountainous township in Qinghai. AFP did not find any official reports of health workers disinfecting uninhabited mountains in China.

"Only the anti-human #cultCCP could come up with this kind of posed image to fool people," reads the post's caption, written in simplified Chinese characters.

"Qinghai big whites went deep into the snowy mountains to disinfect, where could the coronavirus be in this uninhabited frozen wasteland..."

One of the photos appears to show the hazmat-suited workers sitting at a table outdoors in the snow while another sprays the ground in front of them with disinfectant. The second is a group photo, showing the "big whites" holding the flag of the Chinese Communist Party. 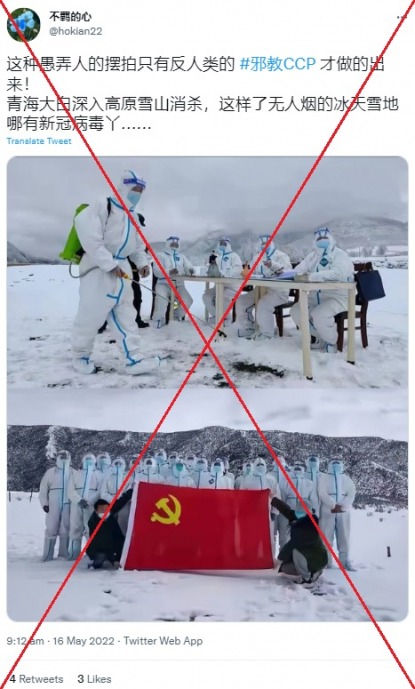 "Big whites" is a nickname given to Chinese health workers and volunteers dressed in white hazmat suits and PPE gear.

Since early May 2022, authorities in Qinghai province have reported more than 100 Covid-19 cases, prompting testing and disinfection drives across the Chinese northwestern mountainous province, which borders Tibet.

The strict measures are part of China's "zero-Covid" strategy, which includes snap lockdowns, mass testing and lengthy quarantines to quash virus outbreaks, no matter the cost to the economy or freedoms of its people.

Among its arsenal of virus controls is disinfectant spraying, which a top Shanghai official lauded as a key part of a "grand assault" on the virus.

But experts interviewed by AFP said the labour-intensive campaigns are relatively pointless against a virus that spreads through droplets expelled in coughs and sneezes into the air.

Social media users appeared to believe the claims, with one commenting: "They can make money from disinfection! These people don't let go of any chance to make money!"

"They are addicted to killing the virus, even where there is no virus," said another.

However, the photos were shared in a misleading context.

Reverse image and keyword searches found the two photos were published in a post on Chinese social media and messaging platform WeChat by the government of Xining, the capital of Qinghai province, on May 14, 2022.

The article describes the testing drive for nearly 5,000 residents in the township on that day.

Baoku is a township located in Datong Hui and Tu Autonomous County, which is under the administration of Xining.

Below is a screenshot comparison of the photos in the misleading posts (L) and the genuine photos on WeChat (R): 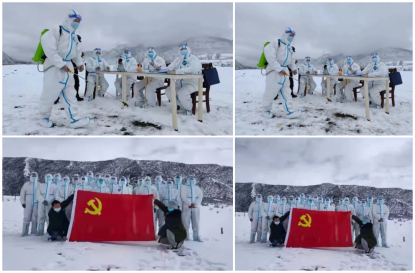 Chinese state-run news agency Xinhua published similar photos in its report about the testing drive in Baoku township, which was also published on May 14, 2022.

It includes the photo of health workers sitting at a table outdoors.

Another photo shows a licence plate of a car bearing the Chinese character for "Qing" and the letter "A", which means the vehicle was registered in Xining.

Below is a screenshot of the Xinhua photo, with the part showing the Qinghai licence plate marked by AFP:

Screenshot of the Xinhua photo showing a Qinghai licence plate

A video taken from a different angle was also posted here on Douyin, the Chinese version of TikTok, by a Qinghai-based user on May 14, 2022.

The Xining government has posted other clips of workers disinfecting local homes, but AFP has not found any official statements or online reports of "big whites" spritzing uninhabited places with disinfectant.