After Kenyan presidential hopeful Raila Odinga picked former justice minister Martha Karua as his running mate, online posts appeared claiming that US Vice President Kamala Harris and Tanzanian President Samia Suluhu congratulated her on Twitter. But the claims are false; the purported tweets sharing congratulations were fabricated, and neither Harris nor Suluhu have commented on Karua’s candidacy for deputy president. 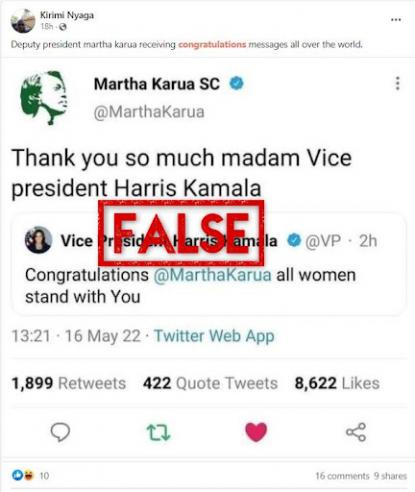 The purported tweet, in Swahili, reads: “I am happy to receive news that Martha Karua has been selected to be the running mate of Raila Odinga in Kenya’s presidential race. Karua is recognized on the continent for her remarkable work and she will be resourceful to the nation of Kenya. I pray that Kenyans use this opportunity for change”. 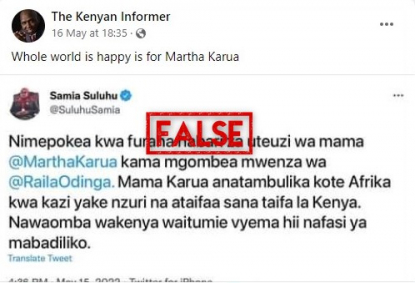 The same claim was shared on Facebook (here, here and here), on Twitter and in WhatsApp groups.

Many appeared to believe the screenshots were genuine, including Karua, who in a television interview said she had seen the congratulatory tweet from Suluhu, Tanzania’s first woman president.

Meanwhile, Kenyan governor Kivutha Kibwana echoed the claims during a TV interview but was corrected by the host. 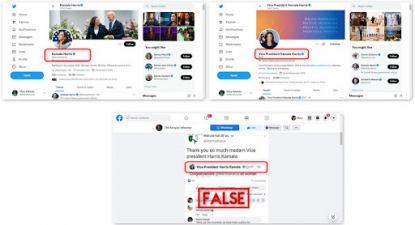 Screenshots of the official Kamala Harris accounts (top right and left) and the fabricated tweet (bottom), taken on May 18, 2022

Meanwhile, the office of the Tanzanian president dismissed the congratulatory tweet attributed to her as "fake".

As Kenya prepares to elect its fifth president on August 9, 2022, candidates eyeing the top seat have started announcing their running mates.

This year's presidential contest is shaping up to be a two-horse race between Deputy President William Ruto and 77-year-old Odinga, a former prime minister.

Odinga is taking a fifth shot at the presidency and his choice of a woman deputy president has been celebrated by several leaders and groups including UN Women Kenya, who described it as “a remarkable moment for gender equality & women's political leadership in Kenya”.