A photo of a bridge in the British capital London has been shared repeatedly in multiple Facebook posts that claim it was illuminated in the campaign colours of Ferdinand Marcos Jr and his running mate Sara Duterte after they won the 2022 Philippine presidential election. But the local authority that manages the bridge told AFP the claim is false. The photo previously circulated in reports about a commemoration of the 50th anniversary of Bangladesh's independence in 2021.

The photo of London's Tower Bridge illuminated in red and green was shared on Facebook here on May 13, 2022.

It has been shared more than 100 times.

The post's Tagalog-language caption translates to English as: "LOOK: The LONDON BRIDGE is one with the people in congratulating our President Bongbong Marcos and VP Mayor Inday Sara Duterte."

Red and green were the duo's official campaign colours. 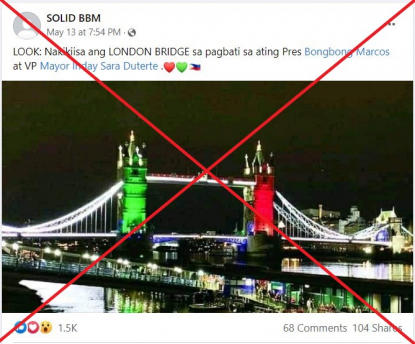 The photo was shared elsewhere on Facebook here and here alongside a similar claim.

Comments on the post suggested some social media users believed it showed the landmark lit up to celebrate Marcos Jr's election victory.

"Thank you, London! We're solid BBM supporters!" one user wrote, using the initials that "Bongbong" Marcos is popularly known by.

"Other countries are celebrating the win of BBM and Sara while other Filipinos in our country are being bitter," another commented.

However, the bridge was not illuminated to celebrate the Filipino politicians' victories.

"Any rumours that the bridge was lit in connection with the elections in the Philippines are wholly false," a spokesperson from the City of London Corporation, the local authority which manages Tower Bridge, told AFP.

"In no circumstances will the bridge be lit to promote or support political parties or individuals."

A reverse image search found the photo was published in a report by Bangladesh-based English-language newspaper The Asian Age in December 2021.

It is headlined: "London Tower Bridge lights up in red and green on Dec 16".

According to the report, the landmark was illuminated in red and green -- the colours of Bangladesh's flag -- to mark the 50th anniversary of Bangladesh's independence and to celebrate the Bangladeshi community's contribution to London.

Below is a screenshot comparison of the photo shared in the false posts (left) and in the 2021 report (right):

A similar photo was used as a header image for a press release about the commemoration, which was posted on the City of London Corporation's website.

AFP previously debunked false posts that claimed the Kuwait Towers were illuminated to celebrate the results of the 2022 Philippine elections.