A photo of the Kuwait Towers illuminated in red and green has been shared more than 150,000 times in posts claiming it shows the landmark lit up with the campaign colours of Ferdinand Marcos Jr and Sara Duterte following their landslide victories in the 2022 Philippine elections. In fact, the photo has circulated online since 2016 and the agency that runs the towers said it showed them lit up to celebrate the United Arab Emirates's national day.

The post was shared on May 10, as Ferdinand "Bongbong" Marcos Jr -- the son of a late dictator and popularly known by his initials "BBM" -- cemented a landslide victory in the Philippine presidential election.

His running mate Sara Duterte, the daughter of outgoing President Rodrigo Duterte, also secured an unassailable lead in the vice presidential race based on an initial count.

The pair used red and green throughout their campaign. 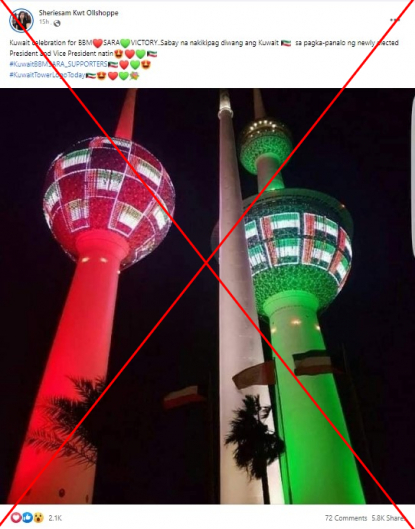 "Wow, Kuwait is one with us, they support BBM," one comment read.

Another said: "Their support is so heart-warming".

However, the photo was taken years before the 2022 Philippine presidential elections.

A Facebook page called "Kuwait Up To Date" posted the photo on December 2, 2016 with the caption: "Kuwait Towers Celebrating UAE National Day".

The picture was shared on the same day in an Arabic-language tweet that said: "Kuwait Towers adorned with the UAE flag on the occasion of #45thNationalDay."

The UAE flag features red and green, alongside black and white.

The photo was also published by local UAE news outlet 24Media in December 2016 in a report about the Gulf state commemorating the UAE's 45th national day.

"Twitter users posted pictures of the Kuwait Towers adorned with the flag of the UAE, and this comes in the context of confirming the brotherly relations between the two countries," 24Media reported.

Below is a comparison of the photo shared in false posts (left) and on Twitter in 2016 (right): 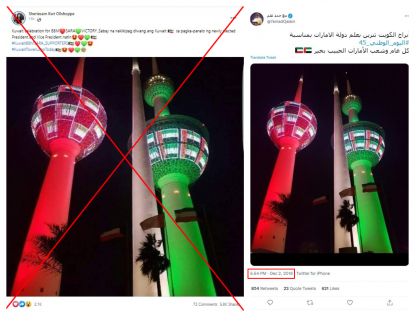 A spokeswoman for Kuwait's Touristic Enterprises Company, a government-owned entity that runs the Kuwait Towers, told AFP on May 11: "These pictures on social media (Facebook) are from UAE's national day."

Keyword searches in English and Arabic did not find any reports that the towers were lit to celebrate the results of the 2022 Philippine elections.