Skip to main content
"Plan B," a form of emergency contraception, sits on a shelf of a local pharmacy in Montgomery, Alabama on May 20, 2019 ( AFP / Seth Herald)

Posts on social media say Tennessee banned emergency contraception pills following the leak of a draft opinion from the US Supreme Court that would overturn Roe v. Wade, a ruling that made abortion a right nationwide. The claim is false; the state's legislation does impose stricter rules on abortion-inducing medication, but it does not mention Plan B, which is a contraceptive.

"Tennessee just banned Plan B and made it a crime punishable by a $50,000 fine to order it," said Pam Keith, a former Democratic US congressional candidate from Florida, in a May 8, 2022 tweet.

The claim gathered tens of thousands of likes before it was deleted. It was also widely shared on Facebook here, here, here and here.

The posts come after the early May story by Politico that showed the US Supreme Court's conservative majority was preparing to overturn Roe v. Wade, a landmark 1973 ruling.

Keith's claim is incorrect, as some people on Twitter -- including a CNN reporter -- have noted.

On May 5, Tennessee Governor Bill Lee signed a new law restricting access to abortion-inducing medication. That triggered the spread of erroneous claims online regarding access to emergency contraception, or "Plan B," in the state.

The law, titled the Tennessee Abortion-Inducing Drug Risk Protocol Act -- or Public Chapter 1001 -- bans the administration of abortion-inducing medication by mail or online. It also sets heavy penalties for physicians who transgress the new measures.

"An individual who intentionally, knowingly, or recklessly violates this bill commits a Class E felony and, upon conviction, will be fined an amount not to exceed $50,000, be imprisoned for a term not to exceed 20 years, or both," the law says.

"A criminal penalty shall not be assessed against a patient upon whom a chemical abortion is attempted or performed." 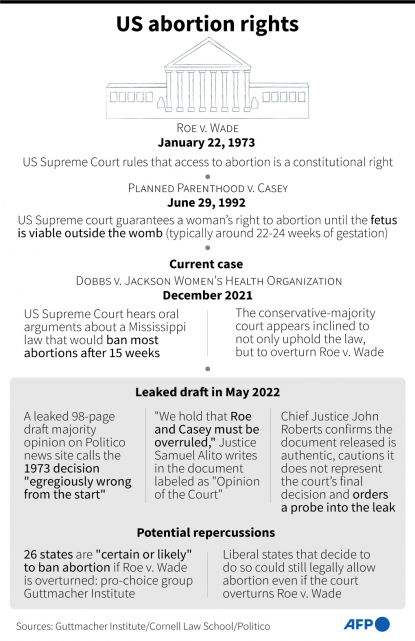 Contrary to claims online, the legislation does not apply to the morning-after pill.

Kati Coats, a research analyst for Tennessee Senate Judiciary Committee Chairman Mike Bell, who sponsored the bill, told AFP the law regulates "abortion-inducing drugs," which Plan B is not.

"The definition of an abortion-inducing drug is limited to a medicine, drug, or substance taken with the intent to terminate a 'clinically diagnosable pregnancy,'" she said.

Several health policy and law experts confirmed to AFP that claims of a Plan B ban in Tennessee are false.