Photo of Kenyan politician breaking fast was taken in 2018, not during iftar at deputy president's residence

A photo has been shared on social media in Kenya alongside a claim that it shows Kalonzo Musyoka - an ally of presidential contender Raila Odinga - at a recent iftar dinner hosted by a major rival, Deputy President William Ruto. In reality, the image was posted online in June 2018 and was taken at a function at Nairobi’s City Hall attended by Ruto and  Musyoka. The picture resurfaced ahead of key elections scheduled for August 2022, and is part of a growing wave of disinformation surrounding the polls.

The photo, which was published on Facebook on April 20, 2022, claimed to show Musyoka along with former Nairobi governor Mike Sonko attending an "iftar dinner" at Ruto's "hustlers mansion (sic)". Iftar is the meal eaten by Muslims after sunset to break the daily fast during Ramadan.

The term “hustler’s mansion” refers to Ruto’s official residence in Karen, Nairobi. Ruto assumed the alias “hustler” in a bid to appeal to jobless Kenyans and informal sectors workers.

In the image (shared elsewhere on social media here and here), Ruto, Musyoka and Sonko are seated together at a table in a room full of people.

The claim was potentially controversial because Ruto and Musyoka belong to rival political coalitions.

But while Ruto indeed hosted an iftar dinner at his Nairobi residence on April 20, 2022, AFP Fact Check found the claim to be false.

The image of the three politicians being shared on Facebook was not taken at Ruto’s event and dates back to 2018.

Kenya is preparing to hold general elections in August 2022, with four-time presidential contender Raila Odinga and Ruto seen as front-runners.

Musyoka, a former vice president, is affiliated with the “Azimio la Umoja - One Kenya Coalition Party” led by Odinga. He is considered a political kingpin of the Kamba people from eastern Kenya who number more than 4.6 million, according to the country’s 2019 census report.

Azimio La Umoja, a movement of reformists, was registered as a coalition on April 13, 2022, and comprises 23 political parties.

Before joining the group in March this year, Ruto and his allies tried but failed to court Musyoka for their own coalition, called Kenya Kwanza which aims to woo economically disadvantaged voters.

A reverse image search conducted by AFP Fact Check found that the picture showing Ruto, Musyoka and Sonko together was taken at an iftar dinner hosted by Sonko at City Hall in Nairobi in June 2018. 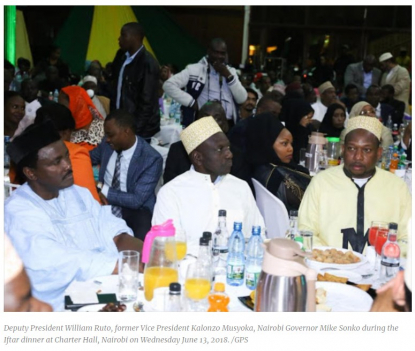 The original photo showing Musyoka (L), Ruto and Sonko (R) was published in the Star Newspaper in June 2018

Other local news organisations in Kenya covered the 2018 event (here and here). At the time, Ruto also shared images from the same function on his Twitter account.

Even though Ruto was in government and Musyoka in opposition in 2018, their presence together was not particularly significant as Kenya was not in an electioneering mode.

Sonko, meanwhile, served as Nairobi governor for three years before he was removed from the office through impeachment by Kenya’s Senate on charges related to abuse of office and gross misconduct on December 17, 2020.