Facebook posts are being shared in Kenya with a letter purportedly sent by the International Criminal Court (ICC) in January 2022 to Kenyan senator Mithika Linturi cautioning him against using a derogatory political statement while campaigning. But the court confirmed to AFP Fact Check that the letter is not authentic.

The purported letter, posted on Facebook on January 19, 2022, has since been shared nearly 70 times and republished in more than 30 other posts. It was also shared here, here, and here on Facebook. 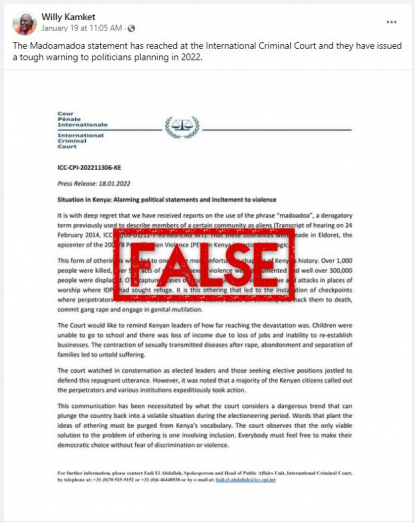 Screenshot of the fabricated letter, taken on January 26, 2022

The letter purportedly issued by the ICC is titled: “Situation in Kenya: Alarming political statements and incitement to violence.” Dated January 18, 2022, it refers to an incident in which Kenyan senator Mithika Linturi used the Swahili phrase “madoadoa”, which loosely translates to “spots”, while on the campaign trail in Eldoret, located in the Rift Valley in Kenya.

In Kenya, the term “madoadoa” is used in reference to “outsiders” or “foreigners” in a region. The word’s use has previously been associated with the displacement of people from their homes in certain regions, and even deaths.

According to a report by Justice Akilano Akiwumi into tribal clashes in Kenya, the term was used in reference to the Kikuyu, Kisii, Luo and other communities who had found permanent residence in the Rift Valley especially in the 1990s.

The affidavit signed by the arresting officer said that Linturi’s use of the derogatory word was “likely to incite violence during the election period”. Kenyans head to the polls on August 9, 2022, to elect a new president.

However, the ICC did not issue a statement regarding the incident.

Statement not from ICC

The ICC told AFP Fact Check that the letter is not authentic.

“This is a false statement. The ICC did not issue it. Our statements are always posted on our website where you can check them,” Fadi El Abdalla, a spokesman of the ICC, said.

Kenyans previously indicted by the ICC

Six prominent Kenyans, including President Uhuru Kenyatta, and his deputy Ruto were accused by the ICC of committing "crimes against humanity" during the 2007-08 post-election violence in the country.

However, charges against all six “were not confirmed or were withdrawn”, according to the ICC.

More than 1,000 people were reported killed during the 2007-08 election violence in Kenya, either in ethnic attacks or by police during riots and protests. Thousands more were forced to flee their homes.

There has been an increasing amount of misinformation spreading in Kenya as elections draw nearer. AFP Fact Check has debunked claims linked to the polls here, here and here.