A post shared on Facebook in Ethiopia claims that Russian channel RT broadcast an alleged plot by World Health Organization (WHO) Director Tedros Adhanom to destabilise his home country of Ethiopia with the help of the West. But the claim is false: AFP Fact Check found no such report, and RT said it never published anything on any of its news platforms in recent weeks claiming that Tedros was trying to undermine Ethiopia. The Russian embassy in Ethiopia also dismissed the claim. 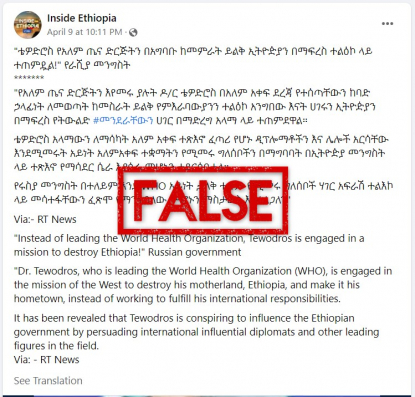 Written in Afaan Oromoo, the translated post partly reads: “According to the Russian government, Tedros is involved in a mission to destroy Ethiopia … working with western countries to destabilise his motherland Ethiopia … conspiring with diplomats and other leading international figures to influence the Ethiopian government. The Russian government, therefore, will not recognise influential people like Tedros who pretend to work in international organisations but are conspiring to destroy other countries.”

On March 25, 2022, Tigrayan rebels in Ethiopia agreed to a “cessation of hostilities” after the federal government announced an indefinite humanitarian truce in the 18-month-old civil war which erupted in November 2020 when Prime Minister Abiy Ahmed ordered troops into the Tigray region to topple the Tigray People’s Liberation Front (TPLF).

Tedros, an Ethiopian from Tigray, was elected as the head of WHO in 2017, becoming the first African director of the organisation. His second term begins in May 2022, WHO announced in October 2021. 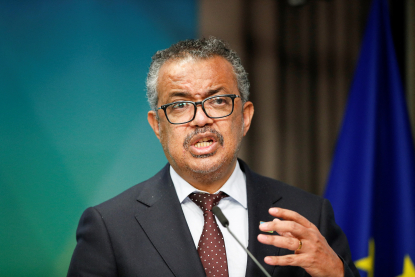 As a Tigrayan, Tedros has often found himself accused of partisan support for the rebel cause, which he has denied. Much of the misinformation about him and the WHO, however, has been linked in one way or another to Covid-19 conspiracies, as AFP Fact Check reported here, here and here.

Likewise, the claim that RT reported a Russian government claim about Tedros working with Western nations to destabilise Ethiopia is false.

Approached for comment by AFP Fact Check, the broadcaster denied publishing any reports claiming Tedros was behind moves to destabilise Ethiopia.

“RT has not published such a report; it is being falsely attributed to RT,” said a statement from RT’s press office.

The Russian embassy in Ethiopia also rejected the claim.

"The words pronounced in this post were never said by any Russian official. This information is fake both regarding the words of the Russian government and RT,” an embassy statement read.

Additionally, there has been no mention of the story in the local Ethiopian press or by any other credible media.