A post shared on Facebook in Ethiopia claims the BBC reported that World Health Organization (WHO) chief Tedros Adhanom Ghebreyesus has been barred from running for re-election. But the claim is false: the BBC ran a story in August 2021 about a US non-profit group opposing Tedros seeking another term, but there is no record of reports about him being prohibited from doing so. 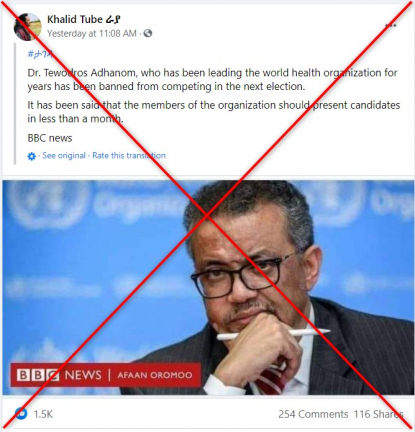 The post, written in Amharic, translates to: “Breaking news: it was reported that Dr Tedros Adhanom, who is the head of the World Health Organization, has been banned from running for re-election.”

The post cites a BBC News article and adds that people interested in the position should put their names forward in a month’s time.

Tedros has been the public face of the WHO’s efforts to fight the Covid-19 pandemic ever since the SARS-CoV-2 virus emerged in Wuhan, China in December 2019.

In May 2021, AFP reported that Tedros would seek a second term in the upcoming WHO director-general elections, scheduled for May 2022.

Tedros, who is Ethiopian, was elected as the head of the UN health agency in 2017, making him the first African to take the helm of the organisation.

WHO director-generals are elected by member states and may serve a maximum of two five-year terms.

But the claim that the BBC reported that Tedros has been barred from seeking re-election is false.

On August 17, 2021, BBC Amharic reported that the Aids Health Foundation (AHF) was opposed to Tedros running for re-election. The US-based non-profit organisation accused Tedros of mishandling the Covid-19 pandemic. The group, founded in 1987, provides medical care for individuals living with or affected by HIV/AIDS.

In June 2021, AHF published a statement outlining six reasons for its opposition to Tedros. On August 13, 2021, it issued another press release calling for a transparent election.

An editor for BBC Amharic news service told AFP Fact Check that the news organisation did not publish any story saying that Tedros has been barred from re-election.

“We didn’t do a story saying that WHO’s director-general has been barred from running for re-election,” said the editor. “The BBC Amharic story only talked about the opposition by a US aid organisation AIDS Healthcare Foundation (AHF) to the re-election of the current WHO director on the basis of a statement released by the organisation. There is nothing in the story that says he is barred from re-election.”

The appointment of the next WHO director-general is slated for May 2022 during the 75th World Health Assembly (WHA) meeting. The WHA is the decision-making body of the WHO.

The WHO told AFP Fact Check that currently candidates interested in vying for the position are submitting their applications.

“Information on candidates, including the curricula vitae and other particulars of their qualifications and experience as received from member states, will be published following the closure of the last regional committee meeting of the year, shortly after October 29, 2021,” said the WHO.