Facebook posts have claimed that football’s ruling body FIFA is set to make World Cup matches in Qatar longer by extending playing time from 90 minutes to 100 minutes. This is false; FIFA denied rumours that games at the 2022 World Cup would be extended. The International Football Association Board, which upholds the rules and laws of the sport, also confirmed matches will remain 90 minutes.

“FIFA are seriously considering changing the duration of a match from 90 minutes to 100 minutes in the 2022 Qatar World Cup,” reads a Facebook post published by a Nigerian-based account on April 6, 2022. 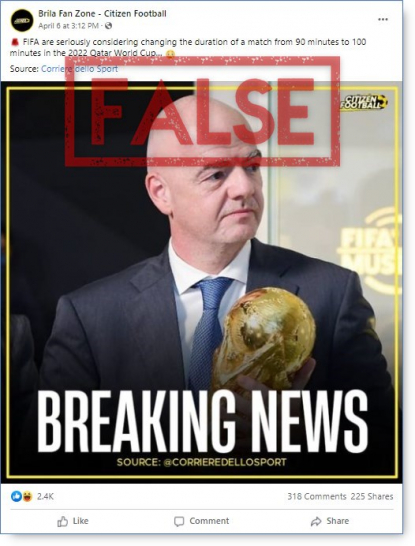 The post, featuring an image of FIFA president Gianni Infantino, has been shared hundreds of times.

In football, regulation playing time consists of two halves of 45 minutes each, for a game total of 90 minutes, excluding additional time allowed for substitutions, injuries and other stoppages.

Social media posts with the same claim have also been shared in Pakistan.

Online rumours of an impending rule change to be implemented at the upcoming FIFA World Cup in Qatar were linked to a report by Italian football website Corriere dello Sport. However, AFP Fact Check was unable to locate it.

According to these rumours, Infantino wanted referees to play more stoppage time in order to make up for the length of time when the ball is not in play, effectively adding another 10 minutes to a game.

FIFA, however, responded in a tweet on April 6, 2022, insisting the duration of matches in Qatar would remain unchanged.

“Following some reports and rumours spread today, FIFA would like to clarify that there will be no changes to the rules regarding the length of football matches for the FIFA World Cup Qatar 2022™️ or any other competition,” reads the brief statement from the federation’s verified Twitter account.

Following some reports and rumours spread today, FIFA would like to clarify that there will be no changes to the rules regarding the length of football matches for the FIFA World Cup Qatar 2022™️ or any other competition.

This was in turn retweeted by the International Football Association Board (IFAB), which acts as the sole custodian of the game’s laws.

On April 9, Infantino confirmed in an interview with French broadcaster beIN SPORTS that there would be no rule change, but said more thought needed to be given to the matter of effective playing time.

"There is a lot of lost time (...) If you ask people to pay to watch 90 minutes of football and the match lasts 50 [effective] minutes, there might be something to change",

The journalist then asks him: "Would a match lasting 100 minutes solve this problem?"

He replies: "No, it won't be a 100 minute match but certainly the additional minutes that the referee will give should be minutes that are really in relation to the time lost during the game. We need to think about the future ... There won't be rule changes, that's for sure. But we have to think about how to make football more attractive."

“As mentioned by FIFA, there are no plans to change the duration of the match, neither for the FIFA World Cup in Qatar nor thereafter,” IFAB’s communications manager Maximilian Müller told AFP Fact Check.

Müller said that changes to the laws follow a clear process and can only be ratified at the IFAB’s Annual General Meeting (AGM) which usually takes place in February or March, although this year’s meeting was postponed.

“Any football association can make a proposal or a recommendation relating to the laws for consideration by the IFAB, by forwarding in writing the suggestions or proposed alterations, requests for experimentation and other items for discussion to the secretary of the IFAB not later than 1 November [each year],” said Müller.

The proposals are then “considered by the IFAB’s technical experts and may then be presented to the Annual Business Meeting (ABM) before potentially being submitted either for approval at the AGM, experimentation or further deliberations by the advisory panels and other expert bodies”.

Once approved at the AGM, Müller said law changes come into force on 1 July.

The IFAB highlights any changes to football laws on its website. Last year saw a slight amendment to the rules related to “The Duration of the Match” for the 2021/2022 season, with the inclusion of the word “playing” in the relevant clause to make it read:  “Allowance is made by the referee in each half for all playing time lost in that half (...)” A video explaining the adjustment was published by the IFAB on June 10, 2021, stating that the amended law took effect on July 1, 2021.

This amendment, however, has had no impact on the duration of regulation play, which remains 90 minutes.

Many were quick to believe the claim because of a report published by the Swiss-based International Centre for Sports Studies (CIES) Football Observatory in April 2021.

It found the effective playing time for matches in 37 different leagues and competitions was two thirds or less of the regulation 90 minutes. 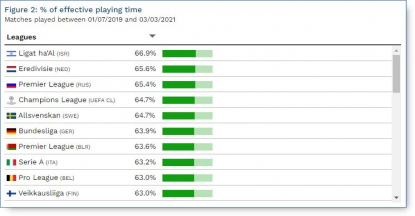 A screenshot of the percentage of effective playing time findings by CIES, taken on April 11, 2022