These images were taken during the 2008 Georgia-Russia war, not in Ukraine

Facebook posts asking for prayers for victims of the war in Ukraine, accompanied by photographs of suffering civilians, have been shared dozens of times in Kenya and Tanzania. But these posts are misleading; the pictures actually show victims of the 2008 war between Georgia and Russia.

The images were published on Facebook on February 26, 2022. The post, which has since been deleted, was shared nearly 180 times.

Written in Swahili, the caption translates to: “Praying For Russia and Ukraine. Please do not skip this post. Just say one word and God will hear your prayer. Bless Oh Lord those who share this post in various groups. If you do share this post, you join me in motivating others to pray for the victims of this war. Today it's Ukraine and Russia, but tomorrow it could be you. We need each other. Please do not ignore this post”. 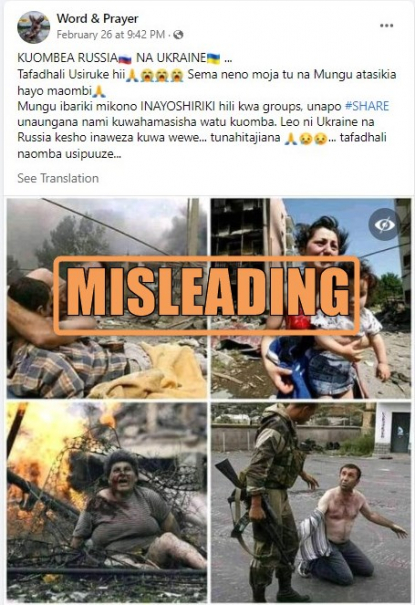 The images were also shared here on Facebook in Tanzania. This caption, also written in Swahili, translates to: “Ukrainians are fleeing their country in large numbers and the conflict intensifies. Like this page for more information about the war.”

But the images are unrelated to Russia’s war in Ukraine.

Photos from another war

A reverse image search conducted by AFP Fact Check found that all four photographs show victims of the Russia-Georgia war of 2008. The pictures were taken by photographers for Reuters.

The first photo shows an unnamed Georgian man crying while holding a loved one. The image is credited to Reuters photographer Gleb Garanich.

“A Georgian man cries as he holds the body of a loved one after a Russian bombardment on August 9 in Gori, Georgia, near the border of the breakaway region of South Ossetia,” the photo’s caption on Reuters' website reads. 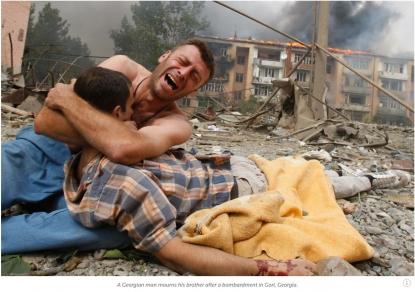 The second photo, also from 2008 and republished here in a 2017 article commemorating the victims of the Russian-Georgian war, shows a Georgian woman crying while holding a baby. The caption on the Reuters website indicates that it was taken in the Georgian town of Gori on August 10, 2008, by photographer David Mdzinarishvili. 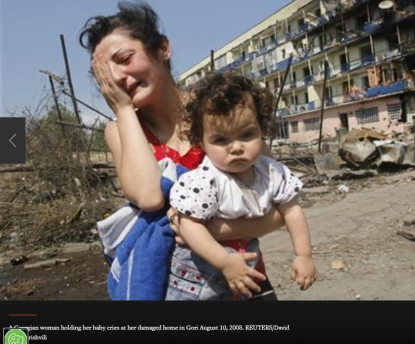 The third image shows an injured woman in Gori.

“An injured Georgian woman shouts in the town of Gori after a Russian warplane dropped a bomb on an apartment block there, killing at least 5 people,” the image’s caption reads. 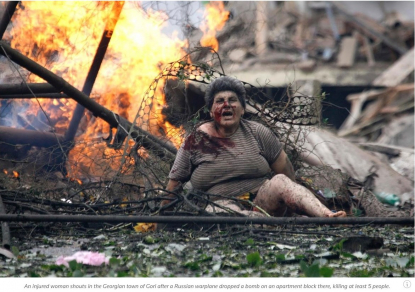 The last photo, available on the Alamy photo archive site, shows a soldier arresting a shirtless man. According to Reuters, the man was found with a weapon in his car at a road checkpoint manned by Russian soldiers in Gori on August 14, 2008. The image is also credited to Garanich from Reuters. 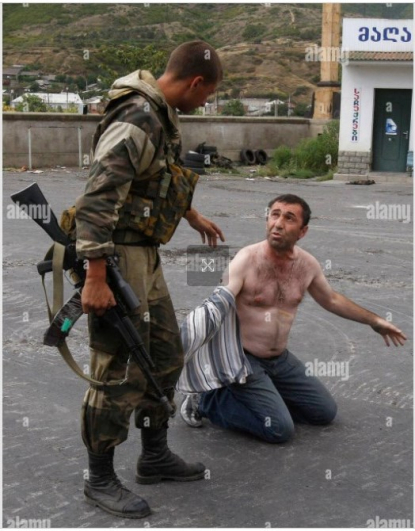 Screenshot of the 2008 Reuters photo from Alamy's online archive

Although the war only lasted five days, it claimed the lives of at least 800 people. In 2016, the International Criminal Court (ICC) launched an ongoing investigation into alleged war crimes and crimes against humanity by all sides during the conflict.

On the seventh day of Russia’s war on Ukraine, Russian troops claimed to have seized control of the Ukrainian port city of Kherson, as AFP reported. More than 350 civilians have been killed, including 14 children, according to Ukraine. The UN says nearly 875,000 people have fled the conflict.

The ICC announced on March 2, 2022, that it was opening a probe, backed by 39 countries, into alleged war crimes committed after Russia’s invasion of Ukraine. As Russia is not a member of the ICC, the Hague- based court only has jurisdiction over Russians arrested in countries that respect the court's jurisdiction.

AFP Fact Check has debunked other inaccurate claims about the war in Ukraine here.