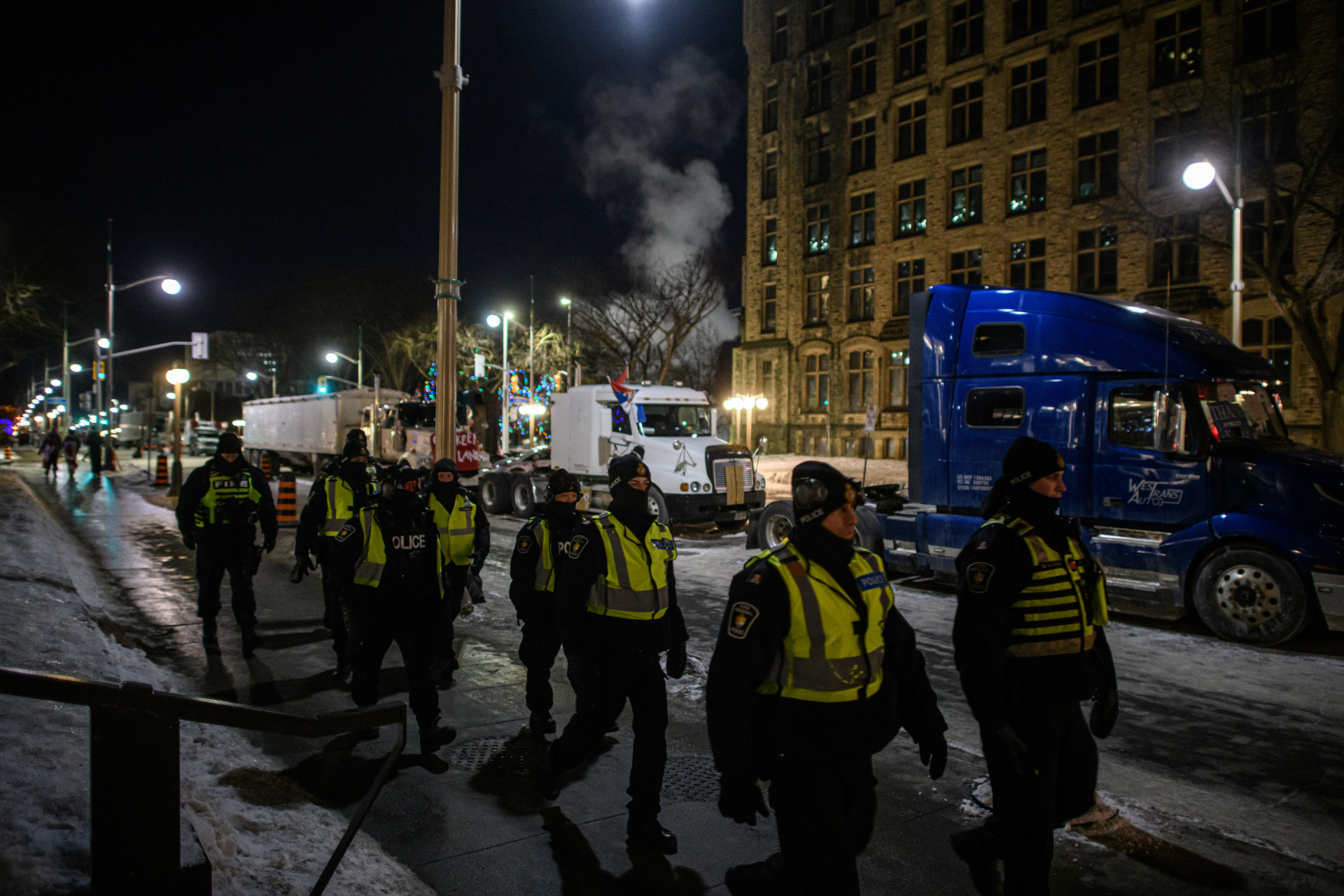 Police officers are seen during a protest over pandemic health rules outside the parliament of Canada in Ottawa on February 13, 2022 ( AFP / Ed Jones)

Posts falsely claim half of Ottawa police resigned during protest

Social media posts claim that half of the Ottawa police force resigned during the anti-vaccine mandate protest in Canada's capital city. But both the Ottawa Police Service and the association representing its officers dismissed the claim.

"Rumors going around that 50% of Ottawa police force is threatening or have resigned," says a February 7, 2022 Facebook post that has been shared more than 1,500 times. It includes a video of Pat King, an Albertan man who is one of the public faces of the anti-vaccine mandate protest that has been occupying the core of Canada's capital for more than two weeks.

In the video, King says: "50 percent of the Ottawa police force have turned in their resignation today," without citing a source.

Ontario declared a state of emergency on February 11 in response to the self-styled "Freedom Convoy" protest, which began with truckers rallying against Covid-19 vaccine mandates that took effect the previous month for drivers crossing the US-Canada border.

The Ottawa Police Service said in a statement on February 12 that all its available officers were deployed and that the force has "a plan to end this unlawful occupation and await the necessary reinforcements to do so." Two days later, Prime Minister Justin Trudeau invoked the Emergencies Act, granting his government sweeping powers to tackle the protest.

Contacted by AFP, Ottawa police said they were unaware of any mass resignations.

"To our knowledge, there have been no resignation due to the demonstration," a spokesperson said on February 14.

The next day, Ottawa police chief Peter Sloly resigned amid criticism of his handling of the protest.

Ottawa Police Association President Matt Skof told AFP in a February 16 email: "I can confirm that the only resignation, as a result of the demonstration, has been that of the chief of police."

This is not the first inaccurate claim about Ottawa police and the protest, which has mushroomed and inspired demonstrations around the world.

AFP has also previously fact-checked a claim that King's court case contesting a ticket in Alberta led to the lifting of public health measures designed to mitigate the pandemic.