As New Zealand faced a surge in Covid-19 infections, social media posts claimed the government planned to add vaccines to the water supply in a bid to increase inoculation rates. The posts purported to show a report from a popular newspaper announcing the plan. However, the purported report is fabricated, the newspaper and the health ministry told AFP. A health expert said the idea of adding vaccines to the water supply was "simply ridiculous".

The post appears to show a screenshot of an article by The New Zealand Herald with the headline "Leaked emails expose Governments [sic] 'underhanded' vaccine plan".

"The emails between Government officials and multiple local councils appear to discuss the possibility of introducing the covid vaccine into city water supplies in areas where the vaccination rates haven't reached 90%," the description reads. 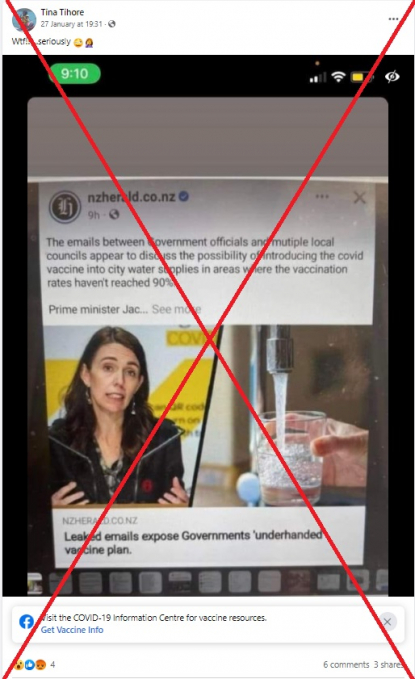 The screenshot circulated in similar social media posts around the world, including New Zealand, Australia, Spain and the Philippines.

The posts circulated as New Zealand Prime Minister Jacinda Ardern's popularity slumped to its lowest level since she took office. Critics accuse her of failing to adapt policies quickly enough to deal with the challenges of the Delta and Omicron coronavirus variants.

A spokesman for The New Zealand Herald said it never ran the story shared online.

"No such post -- or story -- was ever produced by the NZ Herald," the newspaper's managing editor Shayne Currie told AFP.

Keyword searches on the newspaper's official social media accounts did not find the purported report.

A representative for New Zealand's health ministry said it was "completely false" to claim they were adding vaccines to the water supply.

"We encourage people to only go to trusted sources of information when seeking to find out more about the virus and the vaccine," the spokesperson told AFP.

A vaccine expert said it was "simply ridiculous" to say that shots could be added to the water supply to inoculate people.

"Once it made contact with the water, the nanoparticles would disintegrate pretty fast and so would the mRNA. There would be nothing left," Associate Professor Helen Petousis-Harris, a vaccinologist from Auckland University in New Zealand told AFP.

"The idea that you could mass medicate using this approach is simply ridiculous."