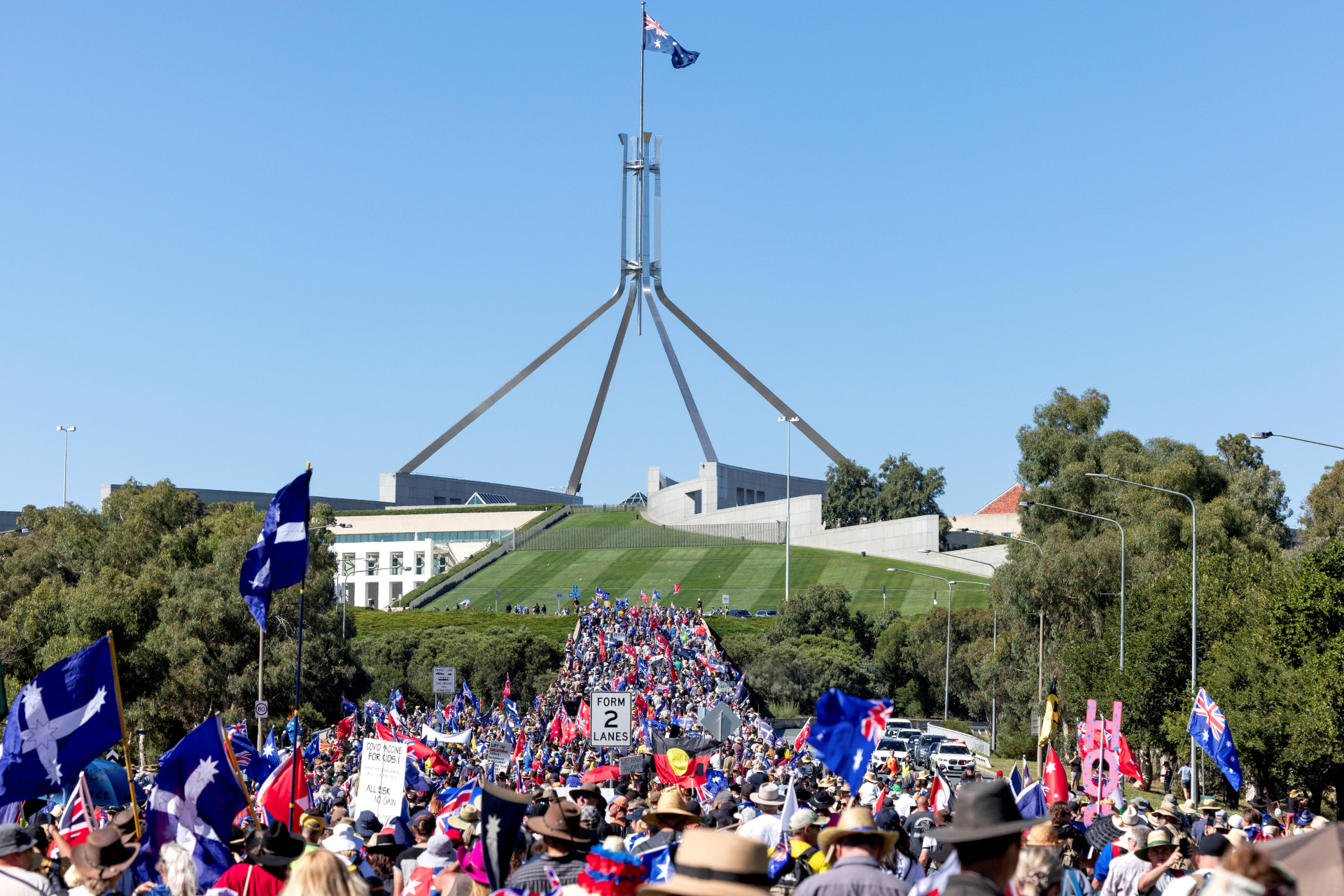 Thousands of protesters march towards the parliament building in Canberra on February 12, 2022, to decry Covid-19 vaccine mandates, the latest in a string of rallies against pandemic restrictions around the world. ( AFP / STR)

Social media posts circulating online following an anti-vaccine mandate protest in Australia’s capital Canberra claim "police report they let 1.4 million vehicles" into the city for a demonstration that attracted millions of people. The claim is false: the Australian Federal Police told AFP they counted about 6000 vehicles at the demonstration and approximately 10,000 protesters. National and international news reports estimated thousands of protesters attended the rally, not millions.

The claims were shared by an Australia-based user on Facebook here on February 12, 2022.

The post circulated online following an anti-vaccine mandate protest in Canberra on the same day.

The protest was part of the Convoy to Canberra movement, a spin-off of the so-called “Freedom Convoy” that has paralysed the Canadian capital Ottawa for more than two weeks.

Similar convoy protests have been staged in New Zealand, where demonstrators set up camp on the lawns of the New Zealand Parliament in the country’s capital Wellington. 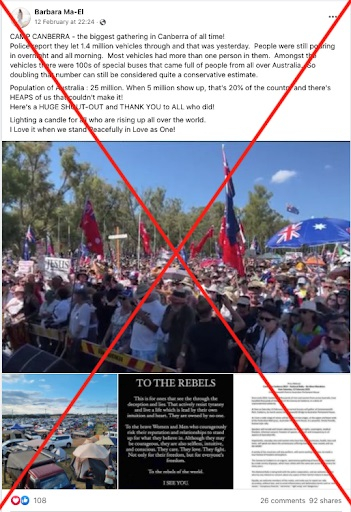 The post's caption reads in part: "The biggest gathering in Canberra of all time!

"Police report they let 1.4 million vehicles through and that was yesterday. People were still pouring in overnight and all morning."

It continues: "Most vehicles had more than one person in them. Amongst the vehicles, there were 100s of special buses that came full of people from all over Australia.

“Population of Australia: 25 million. When 5 million show up, that's 20% of the country and there's HEAPS of us that couldn't make it".

Reverse image searches found the photos shared in the post correspond with scenes from the Canberra protest, but the claim significantly overestimates the crowd size.

The first photo was captured from a video here by a Twitter user taken on the same day with captions about the protest outside Parliament House in Australia. Similar scenes can be seen in this video taken at the same location by Australian news channel 7News on the same day.

The second image appears to be the Epic Showground, where protesters camped. The same location can be seen on Google Street View.

A similar misleading claim was shared by other Australia-based users here and here.

The Australian Federal Police force, which oversees the Australian Capital Territory, said just 6000 vehicles were in Canberra as part of the protest and only 10,000 people attended the demonstration.

“Approximately 6000 vehicles were estimated by ACT Policing to be in the ACT for the event. Up to 10,000 people attended the march and protest at the Federation Mall,” the police statement reads.

Thousands of demonstrators, not millions, marched through Canberra to the parliament building, AFP reported.

Various Australian media organisations -- including SBS, ABC and 7News -- also reported that thousands of people attended the protest, not millions.

Footage and images of the protest also indicate the crowd was significantly smaller than the misleading posts claimed.

These aerial images of the protest were captured by a 7News helicopter and shared by the broadcaster's journalist Jennifer Bechwati on Twitter.

BREAKING: Our news chopper over Parliament House right now. One of the biggest protests I've ever seen. #7NEWS#auspol#ConvoyToCanberrapic.twitter.com/ox0crpU2oa

AFP analysed the area around Canberra's Parliament House with the crowd estimation tool MapChecking and found it can accommodate a maximum of 270,000 people if they were tightly packed together.

In fact, the aerial photos from 7News show there was some space between individual protesters and they did not cover the entire lawn.

Below is a screenshot of the maximum crowd size for the area estimated by MapChecking:

A screenshot of the estimated crowdsize calculated by the MapChecking tool. Taken February 16, 2022.