Skip to main content
Demonstrators march against Covid-19 mask and curfew regulations, in Montreal on May 1, 2021 ( AFP / Andrej Ivanov)

An interview with an Alberta man has been viewed hundreds of thousands of times online, via social media posts that claim his court case led to the lifting of public health measures designed to mitigate the pandemic. This is false; the case, a dispute about a fine for violating the provincial Public Health Act, was unsuccessful, and the government of Alberta says that the lifting of Covid-19 restrictions had nothing to do with it.

"Freedom Fighter Court VICTORY! Ends Masking, Shots, Quarantine in Alberta!" reads the title of an August 3, 2021 clip from the "Stew Peters Show" that has been viewed more than 1.3 million times on Rumble. It has also been shared more than 50,000 times on Facebook, according to the social media monitoring tool CrowdTangle. 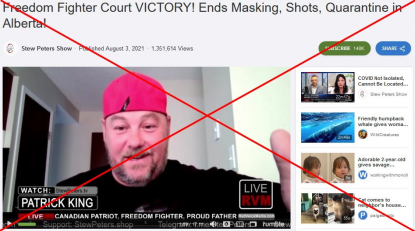 Other examples of the same video uploaded with misleading titles can be found on video sharing platforms BitChute and BrandNewTube. 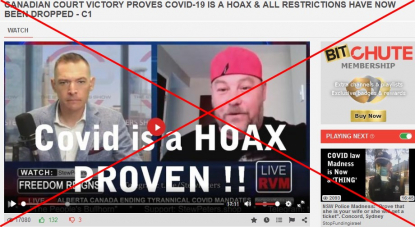 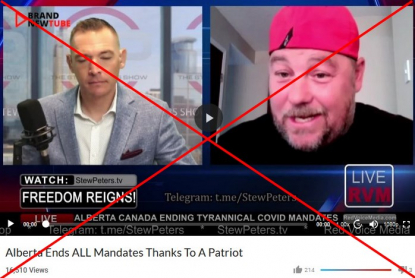 Screenshot of a BrandNewTube video taken on August 10, 2021

In the video, a man named Patrick King explains his legal fight over a Can$1,200 fine he received for violating Alberta's Public Health Act by taking part in a protest despite restrictions on gatherings in the province.

He filed a subpoena asking for Chief Medical Officer of Health Deena Hinshaw to prove that the SARS-CoV-2 virus, which causes Covid-19, has been isolated. King said Hinshaw's lawyers argued she had "no material evidence" to provide. Peters then tells his viewers this means: "The virus has never been isolated. It doesn't exist. You can't prove it's existence, therefore you cannot force me to do anything in the name of something that is non-existent."

But researchers have isolated the virus in Canada and in the United States. AFP Fact Check has previously debunked false claims that SARS-CoV-2 does not exist.

Controversial moves to lift Covid-19 restrictions in Alberta are also unrelated to the case.

Brett Boyden, a spokesman for Alberta's health minister, said: "It is false to claim there is any relationship between the decision on the subpoena and the lifting of public health measures."

With Covid-19 vaccines widely available in the province, it decided to focus on other health issues by removing most Covid-19 public health measures starting in late July 2021.

Almost 66 percent of people in Alberta have received at least one dose of a Covid-19 vaccine.

Boyden said that the Court decision regarding the subpoena was a "preliminary technical matter. It was argued that Dr Hinshaw did not have any material evidence to provide that would be relevant to the matters to be decided at trial. The Court decided to quash the subpoena."

The court document used as "proof" by King says that "the subpoena is technically deficient" and that "Mr King has no evidence showing that the evidence sought from the CMOH (Chief Medical Officer of Health) is likely to be material to the Provincial Court proceeding." No mention of SARS-CoV-2 is made.

Boyden also said: "Mr King was ultimately found guilty of the offence at trial and sentenced to pay a fine."

In an August 6, 2021 video, King himself emphasized that he did not win the court case. 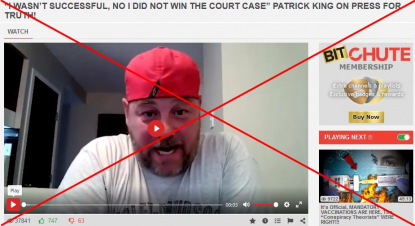 "I'm not responsible for what another broadcaster puts on as their title," he says at 2:15 minute mark in the video, when asked about the "Stew Peters Show" video.

AFP Fact Check previously debunked the false claim that the Supreme Court of Canada was hearing a case about Covid-19 "crimes," and that Covid-19 public health measures had been "revoked."