A photo that went viral in 2015 has resurfaced in Nigeria alongside false claims that it shows a 74-year-old Indian woman who recently gave birth to twin girls. In fact, the picture shows a 101-year-old woman in the United States, holding her great-granddaughter.

An article posted by the Within Nigeria website on September 6 carries the photo alongside a report that the woman had given birth a day earlier in Guntur, a city in the southeastern Indian state of Andhra Pradesh. 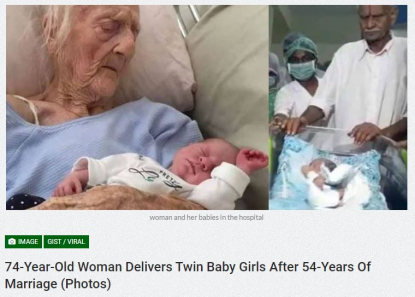 A screenshot taken on November 7, 2019, showing the image as published by Within Nigeria

“According to doctors, Yerramatti Raja Rao who hails from Nelapartipadu in East Godavari district married Mangayamma on March 22, 1962,” reads the article, citing a newspaper named The Hans India. Alongside the woman’s photograph, the article shows another image of a baby in what appears to be a hospital cot.

The article has been shared more than 42,000 times on Facebook, according to social media analysis tool CrowdTangle. We’ve archived it here.

The same text and picture were published on the site of popular Nigerian blogger Linda Ikeji, in a post shared hundreds of times on Facebook. Other blogs in Nigeria ran similar articles alongside the elderly woman’s image — we’ve archived a couple of them here and here.

The website World Daily News Report, which bills itself as satirical, used the picture alongside a different false story, saying that it shows a woman who gave birth at the age of 101 after a successful ovary transplant. The website, which carries the tagline “Where Facts Don’t Matter”, has been the subject of numerous debunks by AFP Fact Check, including here and here.

An Indian woman in her seventies did indeed give birth recently

The Indian website cited as the source of the “74-year-old mother” claim, The Hans India, had indeed carried an article on September 5 about a woman of this age giving birth to twins in the city of Guntur.

Its article included the picture of the baby seen in Nigerian posts, but not that of the elderly woman. A screenshot taken on November 7, 2019, showing the original article by The Hans India

In fact, the birth of the twin girls was reported by major media outlets around the world in September, although some of the details vary.

Yahoo News reported the woman’s age as 74, while The Guardian and the BBC gave her age as 73. These outlets all named the mother as Mangayamma Yaramati, adding that her husband was 82.

The reports said the couple had failed for decades to conceive, and were delighted to have finally been able to have the twin girls via IVF treatment.

As for the elderly woman seen in Nigerian posts about the birth in India, we ran multiple reverse image searches which showed that the picture is completely unrelated to the story.

It shows Rosa Camfield, a 101-year-old former teacher who spent much of her life in the US state of Michigan.

As reported by ABC7News, the photo went viral in March 2015 after Sarah Hamm posted the photo of her newborn daughter with Rosa, Sarah’s grandmother. 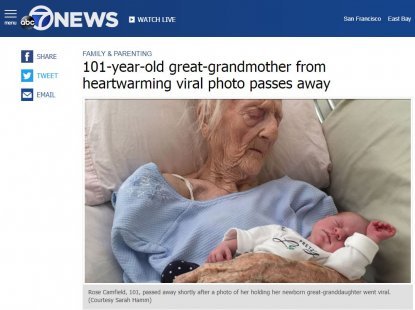 A screenshot taken on November 7, 2019, showing the ABC7 News article

The picture gathered over two million reactions from a single post on a Facebook page called Life of Dad.

Rosa passed away only a few weeks after the photo went viral.