No, this is not a genuine photo of a woman who gave birth to 17 babies

Multiple Facebook posts have shared a composite photo featuring two images, one of a heavily-pregnant woman and one of a man surrounded by babies, alongside a claim that the woman has set a new world record by giving birth to 17 boys. The claim is false; the story originated on a satirical website; one of the images has been doctored and the other image is being used out of context; the world record for most children delivered at a single birth to survive is eight, held by American “octomom” Nadya Suleman.

The misleading posts, for example this one posted by a Sri Lankan Facebook user on June 12, 2019, which has been shared more than 600 times, contain a composite image combining an image of a heavily-pregnant woman, and a photograph of a man in hospital scrubs surrounded by babies.

The text across the top of the image says, “Catherine Bridge has holds the world record by giving birth to 17 babies. All of them are boys”.

The post’s Sinhala caption translates into English as: “May the Triple Gems bless the mother who gave birth to 17 baby boys and set a world record. How great would it be if the Sinhalese had babies like this?” 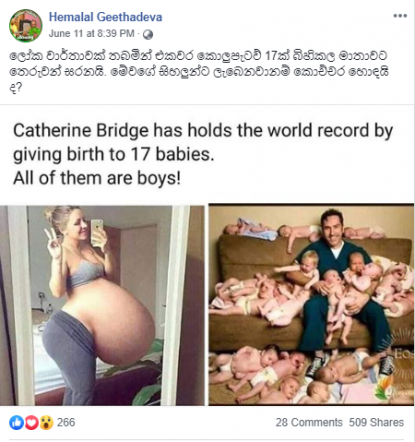 The image and claim have been shared repeatedly on Facebook in Sri Lanka, for example here and here, and has also been posted on social media in many countries including the Philippines and Nigeria.

The claim has also been shared on Twitter, for example here, here and here, and on Instagram here.

Similar claims have circulated online since at least 2016, for example here.

A reverse image search on Yandex of the picture of the pregnant woman in the post led to this image posted on an online social network for artists in August 2015.

The image in the misleading post has been digitally manipulated to make the woman appear more heavily pregnant.

Below is a side by side comparison of the stock photo (L) and the image in the misleading post (R): A Google reverse image search of the photograph of the man in dark green scrubs found the exact same photograph posted here on the Facebook page of a doctor named Robert Biter on August 3, 2012.

A version of the photograph also appears on Biter’s official website.

Below is a screenshot comparison of a photo from Dr. Biter’s website (L) and the image that appeared in the misleading post (R):

Screenshot comparison of a photo from Dr. Biter’s website (L) and the image in the misleading post (R)

A Google keyword search for the text in the misleading posts found this article, published on satirical website World Daily News Report in February 2014.

The headline states: "USA: Mother gives birth to 17 babies at once".

The introductory paragraph of the satirical article states in part: “An American woman has totally annihilated the former World Record for the most babies in a lone pregnancy by giving birth to seventeen babies over 29 hours last weekend at the Indianapolis Memorial Hospital.

"Catherine Bridges and her husband had been trying to have a child for many years and had decided last year to use medical assistance from a fertility clinic in Rhodes Island."

The website included this disclaimer page noting their articles are "satirical and fictional" in nature.

This is not the first time that hoaxes on a record number of births have circulated on the Worldwide Web. Here is a report published by AFP about a similar claim.

According to the Guinness World Records website, the current record holder of "most children delivered at a single birth to survive" is American Nadya Suleman, who had eight babies in January 2009.